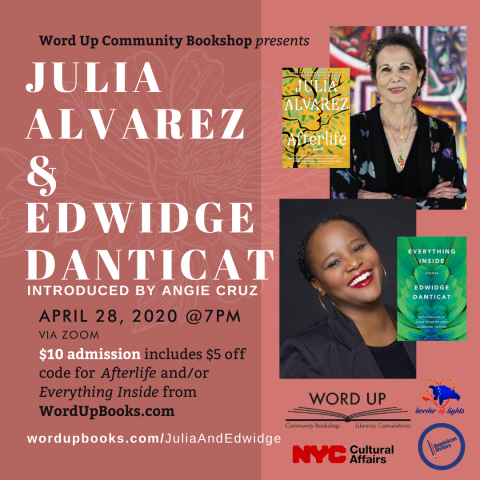 BUY TICKETS AND BOOKS BELOW

Word Up presents Julia Alvarez (author of Afterlife) and Edwidge Danticat (author of Everything Inside) in conversation, taking place via Zoom on April 28, 2020, at 7pm EST.

The authors will be introduced by Angie Cruz.

This event is organized by Word Up Community Bookshop; co-sponsored by Border of Lights and Dominican Writers Association; and supported, in part, by public funds from the New York City Department of Cultural Affairs in partnership with the City Council.

Born in New York City in 1950, Julia Alvarez's parents returned to their native country, Dominican Republic, shortly after her birth.  Ten years later, the family was forced to flee to the United States because of her father’s involvement in a plot to overthrow the dictator, Trujillo. Alvarez has written novels (How the García Girls Lost Their Accents, In the Time of the Butterflies, ¡Yo!, In the Name of Salomé, Saving the World, Afterlife), collections of poems (Homecoming, The Other Side/ El Otro Lado, The Woman I Kept to Myself), nonfiction (Something to Declare, Once Upon A Quinceañera, and A Wedding in Haiti), and numerous books for young readers (including the Tía Lola Stories series, Before We Were Free, finding miracles, Return to Sender and Where Do They Go?). Alvarez’s awards include the Pura Belpré and Américas Awards for her books for young readers, the Hispanic Heritage Award, and the F. Scott Fitzgerald Award.  In 2013, she received the National Medal of Arts from President Obama.

Edwidge Danticat is the author of several books, including Breath, Eyes, Memory, an Oprah Book Club selection, Krik? Krak!, a National Book Award finalist, The Farming of Bones, The Dew Breaker, Create Dangerously, Claire of the Sea Light, and Everything Inside. She is also the editor of The Butterfly's Way: Voices from the Haitian Dyaspora in the United States, Best American Essays 2011, Haiti Noir and Haiti Noir 2. She has written seven books for children and young adults, Anacaona, Behind the Mountains, Eight Days, The Last Mapou, Mama's Nightingale, Untwine, My Mommy Medicine, as well as a travel narrative, After the Dance. Her memoir, Brother, I'm Dying, was a 2007 finalist for the National Book Award and a  2008 winner of the National Book Critics Circle Award for autobiography.  She is a 2009 MacArthur fellow, a 2018 Ford Foundation “The Art of Change” fellow, and the winner of the 2018 Neustadt International Prize and the 2019 St. Louis Literary Award.

Everything Inside: Stories (Hardcover)