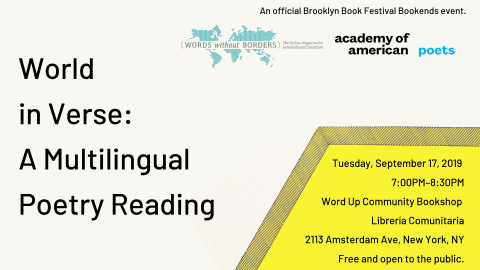 Join Words Without Borders (WWB) and the American Academy of Poets (AAP) for a celebration of the 2019 Poems in Translation Contest winners, with readings by Mónica de la Torre, Jacob Rogers, and others.

Having received 717 poems from 282 poets from 87 countries translated from 55 languages WWB and AAP are thrilled to announce the four winning poems, which will be published in Poem-A-Day and in Words Without Borders every Saturday this September. Congratulations to the winners:

1) “An Apocryphal History of the Discovery of Migration" by Alba Cid, translated from Galician by Jacob Rogers

2) "Tomboy" by Claudia Masin, translated from Spanish by Robin Myers

3) "Pillow" by Lee Young-ju, translated from Korean by Jae Kim

This is an official Brooklyn Book Festival Bookends event and is free and open to the public.