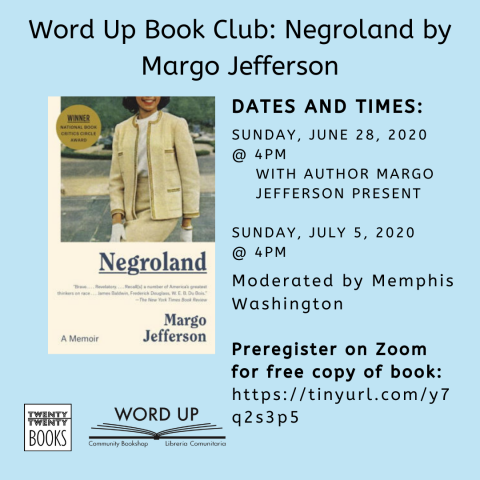 Register in advance on Zoom here.

Margo Jefferson's Negroland: A Memoir is the focus of Word Up's next book club in partnership with TwentyTwenty Books. There will be two meeting dates (June 28 and July 5, both 4pm), and the author will be present for the first meeting to discuss the book with attendees. This book club will be moderated by Memphis Washington. After registering on Zoom, attendees will receive a link so they may obtain a free copy of Negroland at WordUpBooks.com, courtesy of TwentyTwenty Books.

About Negroland:
Margo Jefferson was born in 1947 into upper-crust black Chicago. Her father was head of pediatrics at Provident Hospital, while her mother was a socialite. Negroland chronicles her experiences in and around this insular and exclusive community, which has a long history originating in the antebellum South. It evolved into a world of exclusive sororities, fraternities, networks, and clubs—a world in which skin color and hair texture were relentlessly evaluated alongside scholarly and professional achievements, where the Talented Tenth positioned themselves as a third race between whites and “the masses of Negros,” and where the motto was “Achievement. Invulnerability. Comportment.” At once incendiary and icy, mischievous and provocative, celebratory and elegiac, Negroland is a landmark work on privilege, discrimination, and the fallacy of post-racial America.

About the author:
Margo Jefferson is a Pulitzer Prize-winning critic and the author of Negroland and On Michael Jackson. Negroland won the National Book Critics Circle Award for Autobiography, The Heartland Prize, The Bridge Prize and was shortlisted for the Baillie Gifford Prize. She has been a staff writer for the New York Times and a contributor to New York Magazine, The Guardian, O, The Oprah Magazine, VOGUE, the Washington Post and other periodicals. Her work has also appeared in many anthologies, including Best American Essays, Best African American Essays, The Mrs. Dalloway Reader and The Jazz Cadence of American Culture. She teaches writing at Columbia University.

About the moderator:
Memphis Washington is a Harlem-raised writer, reader, student, and aunty extraordinaire. They study earth and environmental systems science at City College of New York.

AND REMEMBER!
TwentyTwenty Books, named in part due to the 2020 census, strengthens a literary culture that reflects modern America—a culture in which we are all seen and heard. The African-American population has been historically undercounted in the decennial census, disadvantaging their families, communities, and neighborhoods. The 2010 Census undercounted the African-American population by more than 800,000. Today, more than one in three African Americans live in hard-to-count census tracts. Make sure to take the 2020 Census at my2020census.gov. If you let us know you took it here, we will send you a coupon code for 15% off your next online order!