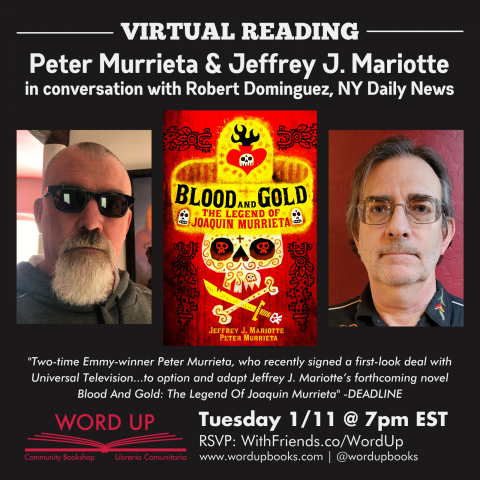 Join us for a reading of Blood & Gold: The Legend of Joaquin Murrrieta by author Peter Murrieta and Jeffrey J. Mariotte and in conversation with Robert Dominguez, editor from NY Daily News.

ABOUT BLOOD & GOLD: THE LEGEND OF JOAQUIN MURRIETA

When Joaquin Murrieta's older brother and cousin head for the riches of the California gold fields, he cannot resist the restless desire to follow. In a bold move, he convinces Rosita, the young woman he loves, to run away with him under cover of darkness. They follow the irresistible lure of the future they might grasp for their own in America, the land of dreams. Instead, they face deep prejudice and explosive violence that leads to unspeakable tragedy, and forces Joaquin to set his sights on being a leader of men-becoming a legend, in the process. To make a place for himself and his people, he strikes back at the whites and the devastating, perpetual hatred they feel toward the Mexicans. Determined not to fail, to carve out a place in this vast land for himself and his followers, Joaquin Murrieta fights back with a stubborn will that is sure to win all...

But can he succeed? With his band of outlaws-and then, an army of patriots-he is determined to drive the Americans from the land that had so recently belonged to his beloved Mexico. It seems an almost unattainable achievement to some, but Joaquin cannot consider failure in this obsession. With Joaquin's brother murdered, and his band of renegades on the run, they must make their final stand and face Murrieta's evil nemesis-cruel California Ranger Harry Love-who has been given carte blanche to do whatever it takes to kill Murrieta and drive his followers out of California for good. As the battle rages in a final showdown between Love and Murrieta, it's kill or be killed. Only one of them can walk away from BLOOD AND GOLD...

Purchase a copy of BLOOD AND GOLD below.

PETER MURRIETA, the recipient of the Imagen Foundation’s Norman Lear Writer’s Award and Director In Residence at the Sidney Poitier New American Film School, is a multiple Emmy-Winner known for award-winning series like Netflix’s "Mr. Iglesias" and Disney’s "Wizards of Waverly Place," which notably launched the career of global superstar, Selena Gomez. Over the last two decades, Peter has produced over 300 hours of television, including hit shows “One Day At A Time,” (Netflix), “Lopez” (TV Land), “Superior Dougnuts” (CBS) and “Cristela” (ABC). His extensive experience and commitment to creating shows that serve as star vehicles for LatinX actors that also achieve mainstream success, is second to none in the industry. More than any other producer in Hollywood, Peter has developed projects that have contributed to the careers of the industry’s biggest Latino stars, including Selena Gomez, George Lopez, Gabriel “Fluffy” Iglesias, and Cristela Alonzo, among others.

Robert Dominguez is the managing editor of the New York Daily News and has been an editor and reporter on various desks for the paper since 1993. He writes the Justice Story series and is editor of special sections including Viva, the monthly Latino lifestyle insert, Hometown Heroes and The News’ "100 Years Bold" centennial celebration issue.

Blood and Gold: The Legend of Joaquin Murrieta (Paperback)