Stephanie Jimenez's THEY COULD HAVE NAMED HER ANYTHING 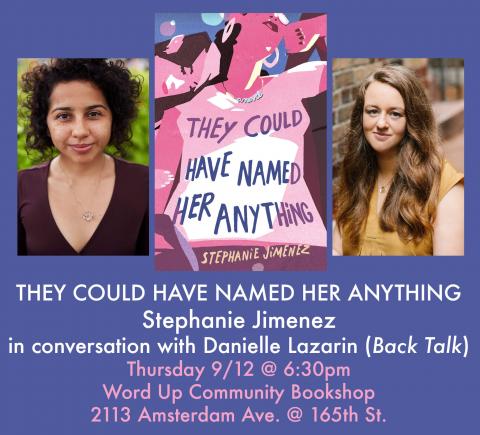 RSVP &/or reserve a discounted book to pick up at the event here.

Stephanie Jimenez will read from her debut novel, They Could Have Named Her Anything, followed by a conversation with Danielle Lazarin, author of Back Talk: Stories.

Every morning, seventeen-year-old Maria Anís Rosario takes the subway an hour from her boisterous and close-knit family in Queens to her private high school on the Upper East Side, where she struggles to fit in as one of the only Latina students—until Rocky welcomes her into this new life. White, rebellious, and ignored by her wealthy parents, Rocky uses her money toward one goal: to get away with anything. . . .

A character in its own right, Jimenez’s New York City is full of contradictions, particularly its racial and economic segregation, the stark contrast of its struggling denizens and those extremely wealthy. Her renderings of these characters tell a larger story about the effects of gentrification and are, as Danielle Lazarin (author of Back Talk: Stories) writes of the novel, “a powerful reminder that moving between worlds is rarely free, and that the most valuable educations take place outside the classroom.”

They Could Have Named Her Anything (Paperback)