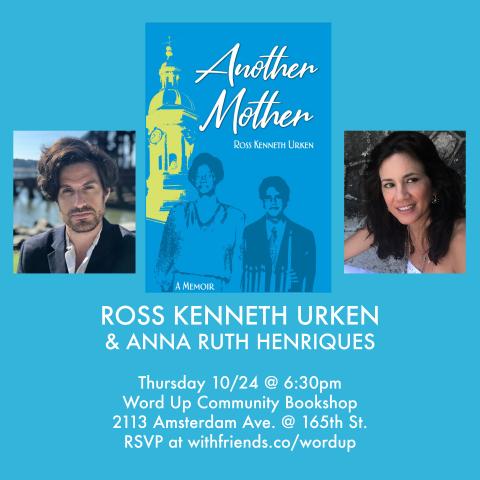 Why does a Jewish boy from Princeton, New Jersey speak with a Jamaican-inflected accent? In Another Mother, a memoir, Ross Kenneth Urken writes about his special relationship with his childhood nanny, Dezna Sanderson. Jamaican poet and artist Anna Ruth Henriques, will act as interlocutor for the evening.

Born and raised in Jamaica, Anna Ruth Henriques is a multi-talented creator. An award-winning artist, her artworks are in the permanent collections of New York’s Jewish Museum and El Museo del Barrio, as well as the National Gallery of Jamaica. She launched her first jewelry collection at Barneys New York and is the author and illustrator of The Book of Mechtilde and is currently working on a novel in prose.


About the book:
After his cherished childhood nanny dies, a Jewish young man entering adulthood realizes there’s so much he has yet to learn about the woman who leant him her accent and with whom he shared an unlikely kindred spirit. Part memoir, part reportage, Another Mother is a story about family, an unlikely duo, and a woman whose strength held it all together. From New Jersey to Jamaica, Ross Kenneth Urken chronicles the life of Dezna Sanderson, the Jamaican immigrant nanny who had an outsize positive effect on his dysfunctional Jewish American family and his life trajectory.

An anchor in a volatile home—plagued by addiction and mental illness—Dezna became Urken's closest confidante and inspired in him a love of words and narrative. But she vanished before he can ask all the essential questions he wants to about her life – adult to adult. There was a tacit privacy agreement she maintained during his childhood, a sacrosanct code of silence. Her role was to maintain order in this American household while obscuring the chaos of her own past. Yet because she transcended the call of duty in her love and maternal care, the author finds that gag-order null and void. As redemption for his missed opportunity, he goes on a quest to find her through an authentic connection to her Jamaican homeland and her family members. He digs deeper into her family—the three loves, the eight children—and the hardships she faced in her native country—the poverty, the family pineapple business ravaged economically by a calculated CIA plot. After becoming a widow, she escaped to the country that undid hers in search of a better future—forced with the difficult decision of leaving her own kids behind to provide for them. In his quest for the truth of Dezna's past, Urken also encounters unexpected secrets and a spiritual Promised Land.