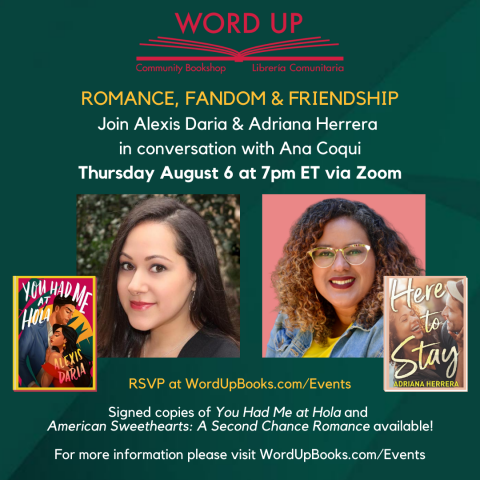 Romance, Fandom, and Friendship: Join authors Alexis Daria and Adriana Herrera for a conversation about books, romance and fandom. In a conversation moderated by podcast host, Ana Coqui, these two friends will talk about their latest works and also the fandoms, films, TV shows and books that made them the writers they are today and what’s inspiring them right now.

Support the authors and get copies of their SIGNED books below!

Alexis Daria is a native New Yorker and award-winning author writing stories about successful Latinx characters and their (occasionally messy) familias. Her debut TAKE THE LEAD won the 2018 RITA® Award for “Best First Book” and was one of the “Best Romance Novels of 2017” in The Washington Post and Entertainment Weekly. Her super powers include spotting celebrities in NYC, winning Broadway ticket lotteries, and live-tweeting.

Adriana Herrera was born and raised in the Caribbean, but for the last fifteen years has let her job (and her spouse) take her all over the world. She loves writing stories about people who look and sound like her people, getting unapologetic happy endings. When she’s not dreaming up love stories, planning logistically complex vacations with her family or hunting for discount Broadway tickets, she’s a trauma therapist in New York City, working with survivors of domestic and sexual violence. Her Dreamers series has received starred reviews from Publishers Weekly and Booklist and has been featured in The TODAY Show on NBC, Entertainment Weekly, NPR, Library Journal and The Washington Post. Her debut, American Dreamer, was selected as one of Booklist’s ‘Best Romance Debuts of 2019’, and one of the ‘Top 10 Romances of 2019’ by Entertainment Weekly. Her third novel, American Love Story, was one of the winners in the first annual Ripped Bodice Award for Excellence in Romantic Fiction. Adriana is an outspoken advocate for diversity in romance and has written for Remezcla and Bustle about Own Voices in the genre. She’s one of the co-creators of the Queer Romance PoC Collective. Represented by Taylor Haggerty at Root Literary.

You Had Me at Hola: A Novel (Paperback) (Signed) (Word Up)