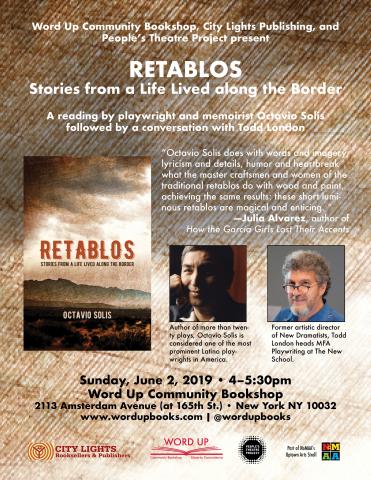 RETABLOS: Stories from a Life Lived along the Border

A reading by playwright and memoirist Octavio Solis

followed by a conversation with Todd London

“Octavio Solis does with words and imagery, lyricism and details, humor and heartbreak what the master craftsmen and women of the traditional retablos do with wood and paint, achieving the same results: these short luminous retablos are magical and enticing.”
—Julia Alvarez, author of How the García Girls Lost Their Accents

Author of more than twenty plays, Octavio Solis is considered one of the most prominent Latino playwrights in America.

Author of more than twenty plays, OCTAVIO SOLIS is considered one of the most prominent Latino playwrights in America. His works have been produced in theatres across the country, including the Center Group Theatre and the Mark Taper Forum in Los Angeles, South Coast Repertory, the Magic Theatre and the California Shakespeare Theatre in the San Francisco Bay Area, Yale Repertory Theatre, Oregon Shakespeare Festival, Dallas Theater Center, and other venues nationwide. Among his many awards and grants, Solis has received an NEA Playwriting Fellowship, the Kennedy Center's Roger L. Stevens award, the TCG/NEA Theatre Artists in Residence Grant, the National Latino Playwriting Award, and the PEN Center USA Award for Drama.

Former artistic director of New Dramatists and executive director of the University
of Washington's School of Drama, TODD LONDON heads the MFA Playwriting program at The New School. His books include An Ideal Theater; The Importance of Staying Earnest, and The World's Room, a novel. His second novel, If You See Him, Let Me Know, is due out this year. This Is Not My Memoir, coauthored with Andre Gregory, comes out next spring. Todd received the George Jean Nathan Award for dramatic criticism and a Milestone Award for his novel. He was the first recipient of Theatre Communications Group’s Visionary Leadership Award for contributions to the American theater.

Retablos: Stories from a Life Lived Along the Border (Paperback)