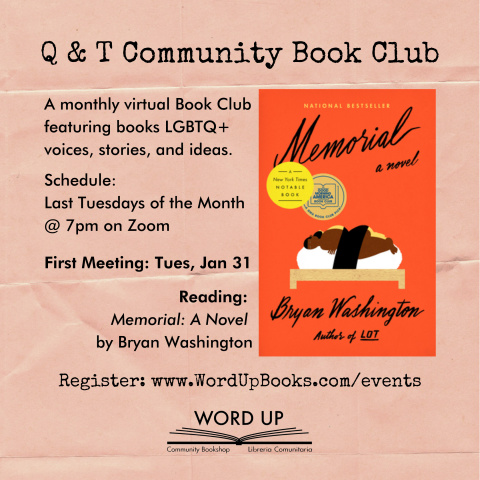 This a virtual book club that meets to discuss writing from different genres written by and/or about LGBTQ+ people. This is a space book club for open discussion, literary analysis, political discourse, and chatting centering exciting contemporary and older books. The book list is still in formation (share your book recommendations by joining), however we will be reading literary fiction, history, fantasy, sci-fi, romance and more.

This is a Q & T program run through Word Up Community Bookshop/Librería Comunitaria and facilitated by Memphis Washington.

REGISTER HERE
We'll send you the zoom information once you are signed up!

When: Every last Tuesday of the Month @ 7pm

Each book is discussed once in a monthly session.

Keep an eye out for Tuesday, February 28's information!

When & Where: Tuesday, January 31st on Zoom

These are only meant to start the conversation. Please come up with your own questions and bookmark passages you might want to discuss! Content warnings at the bottom of the page.

A funny and profound story about family in all its strange forms, joyful and hard-won vulnerability, becoming who you're supposed to be, and the limits of love.

Benson and Mike are two young guys who live together in Houston. Mike is a Japanese American chef at a Mexican restaurant and Benson's a Black day care teacher, and they've been together for a few years—good years—but now they're not sure why they're still a couple. There's the sex, sure, and the meals Mike cooks for Benson, and, well, they love each other.

But when Mike finds out his estranged father is dying in Osaka just as his acerbic Japanese mother, Mitsuko, arrives in Texas for a visit, Mike picks up and flies across the world to say goodbye. In Japan he undergoes an extraordinary transformation, discovering the truth about his family and his past. Back home, Mitsuko and Benson are stuck living together as unconventional roommates, an absurd domestic situation that ends up meaning more to each of them than they ever could have predicted. Without Mike's immediate pull, Benson begins to push outwards, realizing he might just know what he wants out of life and have the goods to get it.

Both men will change in ways that will either make them stronger together, or fracture everything they've ever known. And just maybe they'll all be okay in the end.

Bryan Washington is a National Book Award 5 Under 35 honoree and winner of the Dylan Thomas Prize and the Ernest J. Gaines Award for Literary Excellence. He received the New York Public Library Young Lions Fiction Award for his first book, Lot, which was also a finalist for the NBCC’s John Leonard Prize, the PEN/Robert W. Bingham Prize, and the Aspen Words Literary Prize. He has written for The New Yorker, The New York Times, The New York Times Magazine, BuzzFeed, Bon Appétit, and GQ, among other publications. He lives in Houston.

We strongly encourage people to purchase their books from our home bookstore www.WordUpBooks.com/ or their affiliate accounts on Bookshop.org or Libro.fm (audiobooks).

If you have any questions, comments, or concerns, please share them with Memphis at QNTCommunity@gmail.com