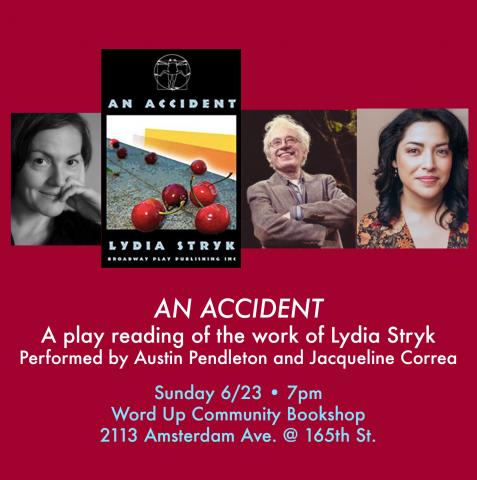 Run down in a grocery store parking lot, a woman awakens weeks later to find that the driver has been continually at her side. There are encounters in life that take you somewhere you've never been and never meant to go.

Lydia Stryk was born and raised in small-town Illinois. She trained to be an actress in London before moving to New York City. She lives between Berlin and beautiful Inwood. Her plays have been produced across the country, in Germany and Canada, and are published by Broadway Play Publishing and Dramatists Play Service. An Accident premiered at the Magic Theatre in San Francisco in 2010. The recent LA production has been nominated by the 28th NAACP Annual Theatre Awards in Best Playwright, Actress and Actor categories.

Austin Pendleton is an actor, director, playwright, and (at HB Studio in New York) a teacher of acting. He is currently acting in New York in Life Sucks, by Aaron Posner. Earlier this year he played in Choir Boy, at the Manhattan Theatre Club on Broadway. He is a member of the Ensemble at Chicago's Steppenwolf Theatre, and apprenticed and then directed and acted for many years at the Williamstown Theatre Festival, under the mentorship of Nikos Psacharopoulos. He has acted in over 300 movies, and on TV in such shows as Oz, Homicide, and Law and Order. He was nominated for a Tony for directing Elizabeth Taylor in The Little Foxes.