OFFSITE: What Is Democracy? A Screening + Q&A with Astra Taylor 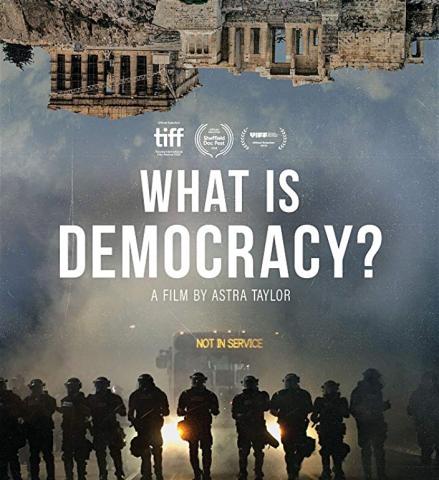 Join us for a screening of the film What Is Democracy? followed by a Q&A by filmmaker Astra Taylor.

About the film:
This documentary examines the philosophy behind the concept of Democracy, from ancient Athens to modern Greece and the American Civil Rights movement.
Astra also authored the book, Democracy May Not Exist, But We'll Miss It When It's Gone.

About the Book:
What is democracy really? What do we mean when we use the term? And can it ever truly exist? Astra Taylor, hailed as a “New Civil Rights Leader” by the Los Angeles Times, provides surprising answers.
There is no shortage of democracy, at least in name, and yet it is in crisis everywhere we look. From a cabal of plutocrats in the White House to gerrymandering and dark-money campaign contributions, it is clear that the principle of government by and for the people is not living up to its promise.
The problems lie deeper than any one election cycle. As Astra Taylor demonstrates, real democracy—fully inclusive and completely egalitarian—has in fact never existed. In a tone that is both philosophical and anecdotal, weaving together history, theory, the stories of individuals, and interviews with such leading thinkers as Cornel West and Wendy Brown, Taylor invites us to reexamine the term. Is democracy a means or an end, a process or a set of desired outcomes? What if those outcomes, whatever they may be—peace, prosperity, equality, liberty, an engaged citizenry—can be achieved by non-democratic means? In what areas of life should democratic principles apply? If democracy means rule by the people, what does it mean to rule and who counts as the people?
Democracy's inherent paradoxes often go unnamed and unrecognized. Exploring such questions, Democracy May Not Exist offers a better understanding of what is possible, what we want, why democracy is so hard to realize, and why it is worth striving for.

About the Author:
Astra Taylor is the author of The People's Platform (winner of the American Book Award) and made two documentary films, Zizek! and Examined Life. Taylor’s writing has appeared in the New York Times, the Washington Post, n+1, and The Baffler, where she is a contributing editor. She lives in New York City.

Democracy May Not Exist, but We'll Miss It When It's Gone (Hardcover)