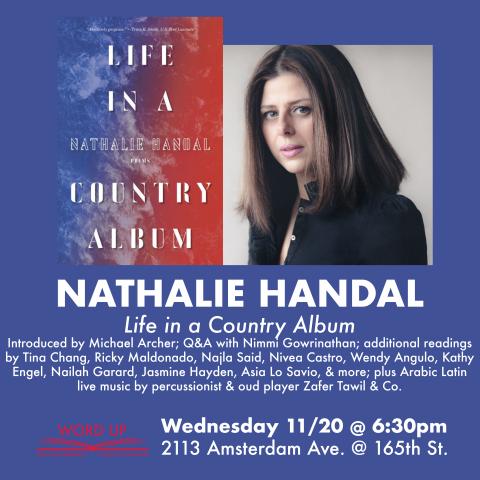 Join us to celebrate the launch of Nathalie Handal new poetry collection LIFE IN A COUNTRY ALBUM.

The book launch will have food and music inspired by the poetry book with appearances by the author Nathalie Handal for a night of celebration and festivities. Michael Archer (Founder of Guernica Magazine) will introduce the book, and Nimmi Gowrinathan (Professor/Founder, Politics of Sexual Violence Initiative & Beyond Identity faculty, City College) will lead a Q & A.

LIFE IN A COUNTRY ALBUM by Nathalie Handal: From migrations to pop culture, loss to la dérive, Life in a Country Album is a soundtrack of the global cultural landscape—borders and citizenship, hybrid identities and home, freedom and pleasure. It’s a vast and moving look at the world, at what home means, and the ways we coexist in an increasingly divided world. These poems are about the dialects of the heart—those we are incapable of parting from, and those that are largely forgotten. Life in a Country Album is a vital book for our times. With this beautiful, epic collection, Nathalie Handal affirms herself as one of our most diverse and important contemporary poets.

I love how the desire and longing running through these poems reaches me via the collection’smany voices and cityscapes, and--most poignantly--via the borders between bodies, nations and hearts. Absolutely gorgeous.
—Tracy K. Smith, Poet Laureate of the United States

NATHALIE HANDAL was raised in Latin America, France and the Middle East, and educated in Asia, the United States, and the United Kingdom. Her recent poetry books include the flash collection The Republics, about the Dominican Republic and Haiti, winner of the Virginia Faulkner Award for Excellence in Writing, and the Arab American Book Award; Poet in Andalucía; and Love and Strange Horses, winner of the Gold Medal Independent Publisher Book Award. She is the author of eight plays, editor of two anthologies, and her poetry, essays and creative nonfiction have appeared in Vanity Fair, Guernica Magazine, The Guardian, The New York Times, The Nation, The Irish Times, among others. Handal is the recipient of awards from The Lannan Foundation, Centro Andaluz de las Letras, Fondazione di Venezia, Emily Harvey Foundation, among others. Her work brings her to audiences globally. She is a professor at Columbia University, and writes the literary travel column “The City and the Writer” for Words without Borders magazine.

Beyond Identity is a program that “trains young women of color from both immigrant and U.S.-based minority communities in identity-driven research, allowing them to draw on lived experiences of discrimination and violence to inform the research agendas and political writing that will be the foundation of distinctive political projects.*The category “women” is inclusive of cis-sexual, transgender, and non-binary forms of gendered identities. The Politics of Sexual Violence Initiative does not discriminate on gender or race. open_in_newbeyondidentity.org/about-us