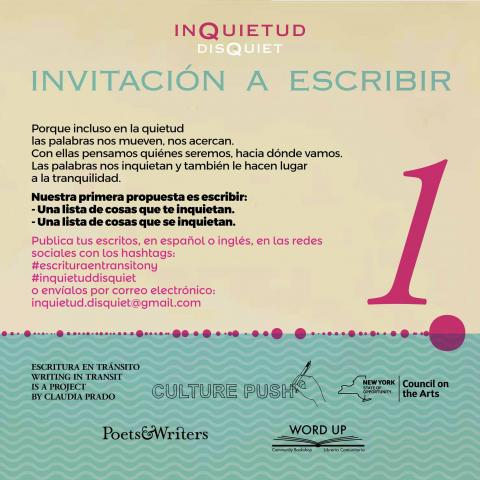 An invitation to write

This is an invitation to read each other’s work and to write, because even in stillness and in quiet, words move us, bring us together. With words, we think about who we will be, about where we’re going. Words disquiet us and also make room for peace.

Our first prompt is to write:

Publish your writing on social media in Spanish or English with the following hashtags:

Inquietud / Disquiet is a set of online creative writing workshops in Spanish designed for New York’s Spanish-speaking community. The workshops’ readings and writing prompts will also be shared through bilingual social media posts, inviting people to write in English or in Spanish.

Any participating texts can be shared using the hashtags #InquietudDisquiet and #EscrituraEnTransitoNY. They will also be published on the project’s blog and its social media, and recited in public readings.

Inquietud / Disquiet is the virtual version of the Escritura en tránsito / Writing in Transit project, which was set to take place in September of this year at the St. George ferry station in Staten Island. The project was created by the writer Claudia Prado, with support from Culture Push.

The idea was to carry out a writing workshop in a public place near the ferry station. Handouts with readings or prompts would have been distributed among passersby as an invitation to all to write during their ferry or bus trip.

The Escritura en tránsito/Writing in Transit project is designed primarily for the Spanish-speaking community, and has some bilingual elements as well. The intention is to create a dialogue among people from various cultures and generations who pass each other every day in a shared space. The project is also a reminder that writing is a tool for expression that belongs to everyone and that we always have at hand, even if we are—amazingly—able to forget it in times like these.

Due to COVID-19, Escritura en tránsito/Writing in Transit was not able to take place, and instead became the online project Inquietud/Disquiet, which adapts many of the elements of the original idea to new possibilities.

Claudia Prado has worked on this project from its inception as a Fellow for Utopian Practice at Culture Push. With this support, Claudia was able to carry out the research and development for the Writing in Transit project, which had been planned for the St. George Station of the Staten Island Ferry but that, due to COVID-19, turned into the online project Inquietud/Disquiet. The support from Culture Push has made this project possible. In addition to Culture Push, this project has received support from NYCA, Poets & Writers, and Word Up Community Bookshop/Libería Comunitaria.