Growing Up in NYC: YA Authors Ed Lin & Lilliam Rivera Reading and Discussion 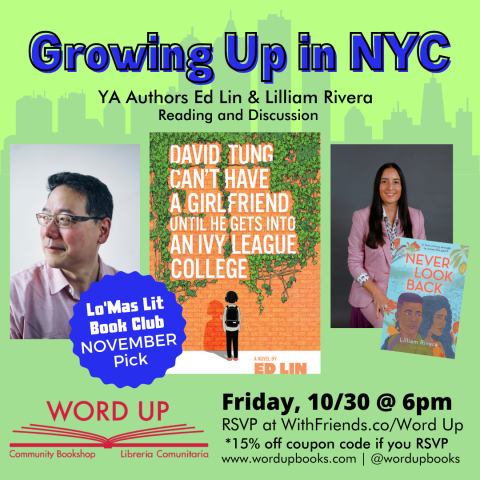 RSVP | VIA ZOOM | INCLUDES 15% COUPON CODE FOR BOTH BOOKS

Ed Lin, a journalist by training, is the author of several award-winning books, including: Waylaid, his literary debut; the Robert Chow crime series, set in 1970s Manhattan Chinatown (This Is a Bust, Snakes Can’t Run and One Red Bastard); and the Taipei Night Market crime series (Ghost Month, Incensed and 99 Ways to Die). Lin is the first author to win three Asian American Literary Awards. He lives in New York with his wife, actress Cindy Cheung.

Lilliam Rivera is an award-winning writer and author of the young adult novels Dealing in Dreams, The Education of Margot Sanchez, the middle grade novel Goldie Vance: The Hotel Whodunit, and Never Look Back (September 2020) by Bloomsbury. Her work has appeared in The Washington Post, The New York Times, and Elle, to name a few. Lilliam lives in Los Angeles.

This event is in collaboration with Lo'Mas Lit Book Club, a reading group, a book club, a discussion zone, quarantine-era hangout time for youth ages 13–25.