To End A Plague READING & CONVERSATION ON PANDEMIC ACTIVISM 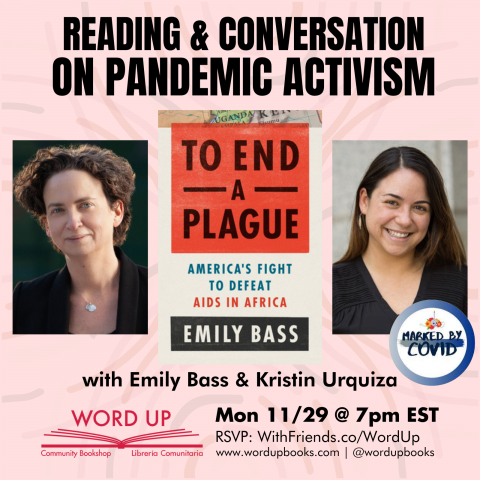 Join us for a reading and conversation with author Emily Bass and Co-Executive Director of Marked by COVID Kristin Urquiza who will be discussing the history and current state of activism during a pandemic -- from AIDS to COVID-19.

ABOUT TO END A PLAGUE

With his 2003 announcement of a program known as PEPFAR, George W. Bush launched an astonishingly successful American war against a global pandemic. PEPFAR played a key role in slashing HIV cases and AIDS deaths in sub-Saharan Africa, leading to the brink of epidemic control. Resilient in the face of flatlined funding and political headwinds, PEPFAR is America’s singular example of how to fight long-term plague—and win.

To End a Plague is not merely the definitive history of this extraordinary program; it traces the lives of the activists who first impelled President Bush to take action, and later sought to prevent AIDS deaths at the whims of American politics. Moving from raucous street protests to the marbled halls of Washington and the clinics and homes where Ugandan people living with HIV fight to survive, it reveals an America that was once capable of real and meaningful change—and illuminates imperatives for future pandemic wars. Exhaustively researched and vividly written, this is the true story of an American moonshot.

Emily Bass has spent more than twenty years writing about and working on HIV/AIDS in America and East and Southern Africa. Her writing has appeared in numerous books and publications including Foreign Policy, TheWashington Post, The Lancet, Esquire, and n+1, and she has received a notable mention in Best American Essays. A lifelong social justice activist, Bass has served as an external expert for the World Health Organization and a member of the What Would an HIV Doula Do collective. She is the recipient of a Fulbright journalism fellowship and a Martin Duberman Visiting Research Fellowship from the New York Public Library. She lives in Brooklyn with her family.

Kristin Urquiza is Co-Executive Director of Marked by COVID, which she co-founded after her Mexican-American father needlessly passed away from COVID on June 30, 2020. Marked By COVID uplifts stories of those impacted by COVID, holds elected officials accountable for their failed response to the pandemic that has resulted in tens of thousands of preventable deaths, and is demanding a coordinated, equity-centered, and data-informed national response to the pandemic. She holds a Master of Public Affairs from UC Berkeley, is a graduate of Yale University and is the proud granddaughter of migrant farmworkers from Mexico and Oklahoma.

To End a Plague: America's Fight to Defeat AIDS in Africa (Hardcover)