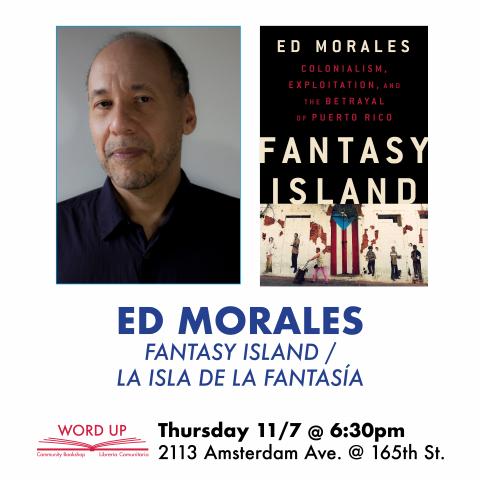 Join Ed Morales at Word Up as he discusses new book Fantasy Island: Colonialism, Exploitation, and the Betrayal of Puerto Rico, available in both English and Spanish editions.

Publishing two years after Hurricane Maria brought such devastation to the island, Ed Morales’s new book Fantasy Island sheds new light on the US involvement in Puerto Rico, revealing the years leading up to the debt crisis, mismanagement of the hurricane, and the exploitation and corruption that is already shaping its aftermath. Ed—a child of parents who migrated from Puerto Rico to New York in the early 1950s—offers both a researched and personal view into Puerto Rico's 122-year history as a colony of the United States.

Ed Morales is an accomplished journalist who has investigated New York City electoral politics, police brutality, street gangs, grassroots activists, and the Latino arts and music scene. He is the author of several books, including Latinx. His work has appeared in Rolling Stone, the New York Times, Miami Herald, San Francisco Examiner, the Los Angeles Times, the Guardian, Jacobin, and the Nation. Morales has also appeared on CNN, Hispanics Today, Urban Latino, HBO Latino, CNN Español, WNBC-TV’s Visiones, WABC’s Tiempo, BBC television and radio, and the Fox Morning News in Washington DC. Ed Morales is currently an adjunct professor at Columbia University’s Center for the Study of Ethnicity and Race, and occasionally appears as a host on WBAI-FM. He lives in New York City.

Can't make it to the event? Order the book here in English and here in Spanish.