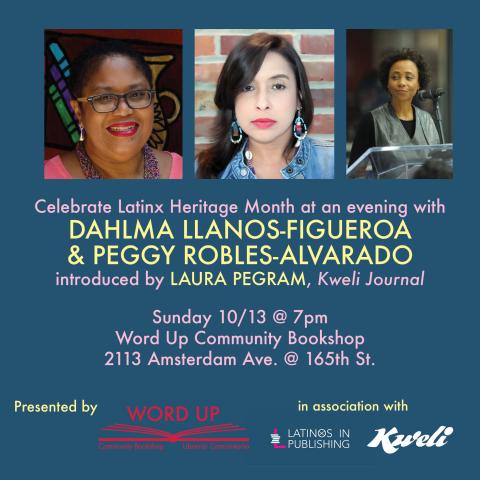 In celebration of Latinx Heritage Month, Word Up Community Bookshop/Librería Comunitaria, Kweli Journal, and Latinx in Publishing present a reading with Dahlma Llanos-Figueroa and Peggy Robles-Alvarado, introduced by Laura Pegram, founder and editor of Kweli.

Dahlma Llanos-Figueroa was born in Puerto Rico and raised in New York City. She is a product of the Puerto Rican communities on the island and in the South Bronx. As a child she was sent to live with her grandparents in Puerto Rico where she was introduced to the culture of rural Puerto Rico, including the storytelling that came naturally to the women in her family, especially the older women. Dahlma's short stories appear in the following anthologies: Bronx Memoir Project, Latina Authors and Their Muses, Chicken Soup for the Latino Soul, Breaking Ground: Anthology of Puerto Rican Women Writers in New York 1980 - 2012, and Growing Up Girl. Dahlma's work also appears in various literary magazines such as the Afro-Hispanic Review and Kweli Journal. At Word Up, Dahlma will present the new paperback edition of her award-winning novel Daughters of the Stone, which follows the lives of five generations of Afro-Puerto Rican women focusing on the legacy passed from one generation to the next. The hardcover edition of Daughters of Stone was a finalist for the PEN/Robert W. Bingham Prize. www.dahlmallanosfigueroa.com

Peggy Robles-Alvarado is a tenured New York City educator and award winning poet with graduate degrees in elementary and bilingual education and an MFA degree in Performance and Performance Studies from Pratt Institute. She is a Pushcart Prize nominee, a CantoMundo Fellow, Academy for Teachers and Home School Fellow, a BRIO (Bronx Recognizes Its Own) performance poet award winner, and an International Latino Book Award winner. She’s authored Conversations With My Skin (2011) and Homage To The Warrior Women (2012), and edited The Abuela Stories Project (2016) and Mujeres, The Magic, The Movement & The Muse (2017). www.robleswrites.com.

Laura Pegram, founder and editor in chief of Kweli Journal, is a multidisciplinary artist who is influencing a new generation of aspiring writers. Author, educator, and a jazz vocalist whose cabaret performance teamed her with jazz pianist, Donald Smith, Ms. Pegram is also a painter. Her richly hued vibrant murals are part of several private collections. She has worked as a development Associate at Scholastic Productions, Inc., as an Instructor at the Frederick Douglass Creative Arts Center and as an Acting Director / Instructor at the John Oliver Killens Young Writers Program.

More about our co-presenters:

Kweli’s mission is to nurture emerging writers of color and create opportunities for their voices to be recognized and valued. By creating a community and programming based on artistic excellence and rigor, Kweli empowers writers to share stories that engage and impact our communities. Our vision is for a world where the narratives being told reflect the truth of our histories and the possibilities for our future. www.kwelijournal.org

Latinx in Publishing has partnered with Latinx owned bookstores on an event series to celebrate Latinx Heritage Month! We have partnered with several Latinx authors who will visit participating stores to do a reading and sign copies of their books. We hope you'll come out and support Latinx business owners and creators. www.latinxinpublishing.com

Daughters of the Stone (Paperback)

Mujeres, The Magic, The Movement and The Muse: An Anthology of Women Writers (Paperback)