CLOTH / It's All in the Heights Book Club: Love Is Powerful by Heather Dean Brewer, with Mari Diop 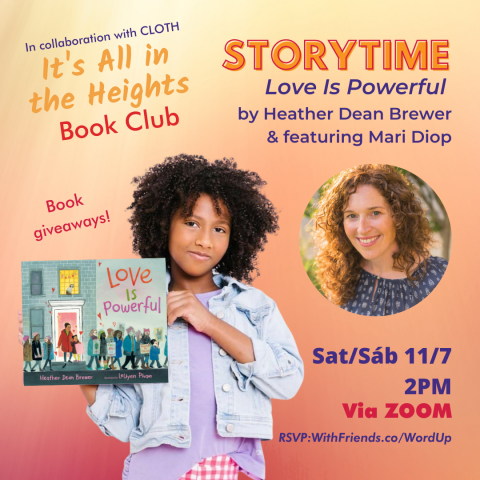 Join us for a story time reading of Love Is Powerful featuring the author Heather Dean Brewer and the inspiration for the story and local youth Mariama "Mari" Diop for CLOTH's "It's All in the Heights" virtual Book Club.

The first 5 registrants get a free copy of the book and others can be purchased at WordUpBooks.com.⁠⠀⁠

Love Is Powerful is a book about a single voice, a voice that sounds a lot like yours. Itbelongs to a little girl named Mari, and she’s not sure if her voice is loud enough foranyone to pay attention to. She has a message to share with the world, but will anyonehear it?Inspired by a real girl named Mari who participated in the January 2017 Women’s March inNew York City, Heather Dean Brewer’s simple and uplifting story, delightfully illustrated byLeUyen Pham, is a reminder of what young people just like you can do to promote changeand equality at a time when our country is divided by politics, race, gender, and religion.

ABOUT Love Is Powerful
A little girl carries a big message—and finds it thrillingly amplified by the rallying crowd around her—in an empowering story for the youngest of activists.

Mari raised her sign for everyone to see.
Even though she was small and the crowd was very big,
and she didn’t think anyone would hear,
she yelled out.

Mari is getting ready to make a sign with crayon as the streets below her fill up with people. “What are we making, Mama?” she asks. “A message for the world,” Mama says. “How will the whole world hear?” Mari wonders. “They’ll hear,” says Mama, “because love is powerful.” Inspired by a girl who participated in the January 2017 Women’s March in New York City, Heather Dean Brewer’s simple and uplifting story, delightfully illustrated by LeUyen Pham, is a reminder of what young people can do to promote change and equality at a time when our country is divided by politics, race, gender, and religion.

ABOUT FEATURED GUESTS
Heather Dean Brewer is a writer, artist, and art director who designs books for kids and adults and loves to ride her bike in the woods. About this book she says, "I've often felt quiet and small and that no one could hear me. But when I joined others in the Women's March and saw my friend Mari lifted above the crowd and heard her voice echo down the streets of New York City, I learned that even the smallest voice has the power to change the world. She lives in Michigan with her family.

Mariama "Mari" Diop lives in New York City and loves the arts, activism, music, and reading.  At the Women's March in 2017, Mari led the crowds in a chant of "Love is Powerful" and realized at a young age the power of sharing her voice.  She also enjoys performing and was on the Broadway First National Tour of Once on This Island.  She is so grateful for the opportunities to share her story.


Through the "It's All in the Heights" Book Club series, CLOTH (Community League of the Heights) (@cloth159) features local authors, local businesses, and local artists through book clubs curated by Sister's Uptown Bookstore and Cultural Center and Word Up Community Bookshop.