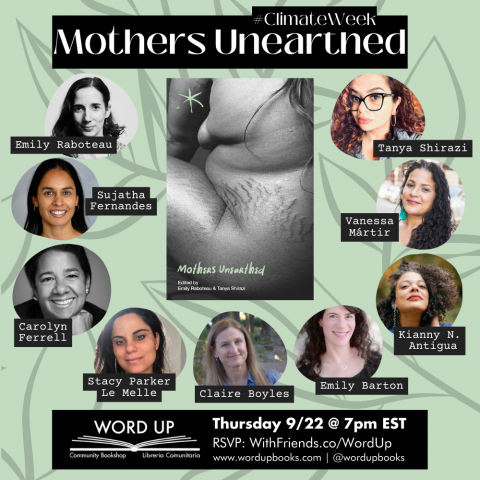 The works in Mothers Unearthed show how mothers re-experience and witness environmental (and social) catastrophe. They excavate and reinscribe the meaning of protectors as mothers. The fear, anger and cautionary hope is palatable in each of the pieces. Each work shows how these different crises impact their children. From forest to wildfires, lives to the COVID-19 pandemic, our sense of safety in the face of social injustice, climate crisis, and public health. It's very personal, and all on these pages.

Aster(ix) is a transnational feminist literary arts journal committed to social justice and translation, placing people of color at the center of the conversation.

This event is a $5 suggested donation ticket. Please register in advance to receive the Zoom link.

ABOUT THE FEATURED AUTHORS

Kianny N. Antigua. [Dominican Republic, 1979] Fiction writer, poet and translator. She is a Senior Lecturer of Spanish at Dartmouth College, and an independent translator and adapter for Pepsqually VO Sound & Design, Inc. Antigua has published twenty-three books of children’s literature, five of short stories, two collections of poems, an anthology, a book of microfiction, a novel and a journal. She has won sixteen literary awards and many of her texts have been included in anthologies, literary magazines, newspapers and textbooks. Some have been translated into English, French and Italian. She is the translator (Eng./Spa.) and the audiobook narrator of Dominicana (Seven Stories Press, 2021), by Angie Cruz; translator of Mi buena mala suerte, by Ruth Behar; and the YA novel Nunca mires atrás (Bloomsbury/Audible, 2022), by Lilliam Rivera.

Emily Barton is the author of three novels: The Book of Esther, Brookland, and The Testament of Yves Gundron. Her fiction, criticism, and essays have appeared in many publications; she writes most often for The New York Times Book Review. Her work has been recognized with grants and fellowships from the Guggenheim Foundation, the National Endowment for the Arts, the Corporation of Yaddo, and the Sustainable Arts Foundation. Barton has also won the Bard Fiction Prize. She has taught, among other places, at New York University, Yale University, Columbia University, and Smith College, and currently chairs the creative writing program at Oberlin College.

Claire Boyles (she/her) is a writer and a former farmer. A 2022 Whiting Award winner in fiction, she is the author of Site Fidelity, which was longlisted for the PEN/Robert W. Bingham Award and is a finalist for the Reading the West Award for Debut Fiction and the Colorado Book Award. Her writing has appeared in VQR, Kenyon Review, Boulevard, and Masters Review, among others. She is a Peter Taylor Fellow for the Kenyon Review Writing Workshops and has received support from the Kimmel Harding Nelson Foundation, the Bread Loaf Orion Environmental Writers Workshop, and the Community of Writers. She teaches in Eastern Oregon University’s low-residency MFA program in Creative and Environmental Writing.

Sujatha Fernandes is a writer, scholar, and teacher. She is a Professor of Sociology at the University of Sydney, where she founded the Racial Justice and the Curriculum Project. Her short stories have appeared in New Ohio Review, Saranac Review, Aster(ix), and The Maine Review. Her essays have been published in the New York Times, The Nation, and forthcoming in Orion Magazine. She is the author of a memoir on a global hip hop life Close to the Edge (Verso), a collection of essays The Cuban Hustle (Duke University Press), and Curated Stories: The Uses and Misuses of Storytelling (Oxford). She is an editorial board member of the literary magazine Transition: The Magazine of Africa and the Diaspora and edited a special issue with Jared Thomas on Bla(c)kness in Australia. She is currently completing a collection of interlinked short stories Shadow People, and a novel Beyond the Monsoon Mountains.

Carolyn Ferrell is the author of Dear Miss Metropolitan, which was recently shortlisted for both the PEN Hemingway Award for Debut Novel and the PEN Faulkner Award for Fiction. Her first book, a short-story collection Don’t Erase Me, was awarded the 1997 Art Seidenbaum Award for First Fiction of the Los Angeles Times Book Prize, the John C. Zacharis First Book Award given by Ploughshares, and the Quality Paperback Book Prize for First Fiction. Ferrell’s stories and essays have been anthologized in The Best American Short Stories 2020 and 2018, edited by Curtis Sittenfeld and Roxane Gay, respectively; The Best American Short Stories of the Century, edited by John Updike; Children of the Night: The Best Short Stories by Black Writers, 1967 to the Present, edited by Gloria Naylor; Apple, Tree: Writers on Their Parents, edited by Lise Funderburg; and other places. She is the recipient of grants and awards from the Fulbright Association, the German Academic Exchange Service (DAAD), the Bronx Council on the Arts, the National Endowment for the Arts, and Sarah Lawrence College. Since 1996, she has been a faculty member in both the undergraduate and MFA writing programs at Sarah Lawrence College. She lives in New York.

Vanessa Mártir is a 1980s Bushwick-raised bocona learning the heartbeat of silence in the countryside of upstate NY; an oil-and-water combination of ambition, imposter syndrome, procrastination, certainty, insecurity and drive. Vanessa's heart genre is creative nonfiction, & she's also a novelist, wanna be poet & playwright. She has been widely published, including in The NY Times, The Washington Post, Longreads, The Guardian, The Rumpus, Bitch Magazine,  and the NYTimes Bestseller ​Not That Bad, edited by Roxane Gay. She is the recipient of the 2021 Letras Boricuas Fellowship, funded by The Andrew W. Mellon Foundation and the Flamboyan Foundation's Arts Fund; a 2019 Bronx Recognizes Its Own (BRIO) Award in Creative Nonfiction; a 2019 AWP Kurt Brown Award in Creative Nonfiction; and a 2013 Jerome Foundation Award. Vanessa is the creator of the Writing Our Lives Workshop and the Writing the Mother Wound movement. She has partnered with Tin House and The Rumpus to publish WOL alumni, and with Longreads and NYU's Latinx Project to publish Mother Wound essays. She has also served as guest editor of Aster(ix) and The James Franco Review. When she's not writing or teaching, you can find Vanessa in an old growth forest, listening to the birds and talking to the trees.

Stacy Parker Le Melle is the author of Government Girl: Young and Female in the White House (HarperCollins/Ecco) and was the lead contributor to Voices from the Storm: The People of New Orleans on Hurricane Katrina and Its Aftermath (McSweeney’s). She chronicles stories for The Katrina Experience: An Oral History Project. Her essay “Ferry Cross the Mersey” was selected for publication as one of the winners of the 2021 Thornwillow Patrons’ Prize. She currently serves as Executive Editor for W.K.Kellogg Foundation’s Solidarity Council on Racial Equity. In 2020, she was named a NYSCA/NYFA Artist Fellow for Nonfiction Literature. Her recent narrative nonfiction has been recently published in Nat. Brut, The Offing, Phoebe, Silk Road  among other publications. She co-founded and curates Harlem’s First Person Plural Reading Series.

Emily Raboteau’s books include The Professor’s Daughter, Searching for Zion, winner of the American Book Award, and Lessons for Survival, forthcoming from Holt in 2023. Her fiction and essays have been widely published and anthologized in Best American Short Stories, Best American Science Writing, Best American Travel Writing, the New York Times, the New Yorker, New York Magazine, the Guardian, and elsewhere. She is a regular contributor to the New York Review of Books and a contributing editor at Orion Magazine. Honors include a Pushcart Prize, The Chicago Tribune’s Nelson Algren Award, and fellowships from the National Endowment for the Arts, the New York Foundation for the Arts, the Lannan Foundation, and the MacDowell Colony.  Raboteau resides in New York City and teaches creative writing in Harlem at City College, once known as “the poor man’s Harvard.”

Tanya Shirazi is from Lynwood, California. She completed her undergraduate studies at UCLA, and received an MS in Counseling Psychology from Mount St. Mary’s University and an MFA from the University of Pittsburgh. Tanya is Senior Editor at Aster(ix) Journal and Fiction Co-Editor for Witness Magazine. She is a Black Mountain Institute PhD Fellow in Fiction at the University of Nevada, Las Vegas. She is currently working on a novel and a collection of short stories.

CANCELLATION POLICY: Word Up Community Bookshop reserves the right to cancel events for any reason, including but not limited to safety concerns.

CODE OF CONDUCT: Please note Word Up has a zero tolerance policy for harassment or intimidation of any kind during any event, virtual or in-person. Please read our Safe Space Policy for more information. Anyone violating these rules will be expelled from the event at the discretion of the organizers.

PHOTOS & RECORDING: Events may be recorded, and video and photos may be posted on our website, social media, and elsewhere. If you would prefer not to be visible, please let a Word Up team member know.

VIRTUAL ACCESSIBILITY: Word Up Community Bookshop/Librería Comunitaria public events are open to all and are presented on Zoom, and Facebook Live when possible. Computer-generated live captions are available on Zoom. Free live transcription and ASL interpretation are available for most programs upon request. If you have other accessibility needs or if you are someone who has skills in making digital events more accessible, please don't hesitate to reach out to events@wordupbooks.com. We are actively learning the best practices for this technology and we welcome your feedback as we begin this new way of connecting across distances