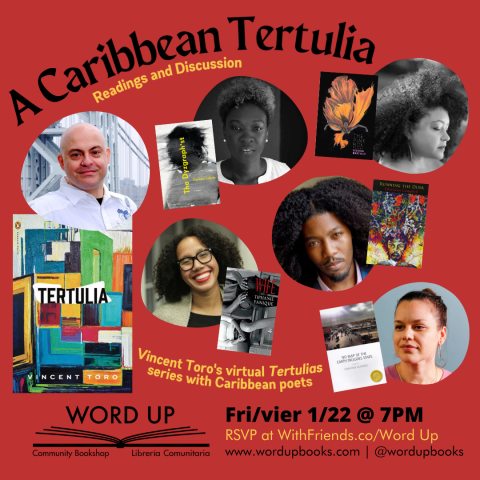 "We know ourselves as part and as crowd, in an unknown that does not terrify. We cry our cry of poetry. Our boats are open, and we sail them for everyone."

Eschewing the conventional book tour reading model for his latest collection, Puerto Rican poet Vincent Toro has adopted a more community-focused approach by creating a series of virtual Tertulias in the spirit of the Latin American social gatherings from which his book takes its title.

For this “tertulia for Tertulia” hosted by Word Up Community Bookstore, Vincent Toro has invited poet Canisia Lubrin, whose book The Dyzgraphxst was also published by Penguin Random House this year, and four other poets from the Caribbean diaspora - Christian Campbell, Yesenia Montilla, Christina Olivares, and Tiphanie Yanique - to read their work and tertuliar in celebration of the rich and eclectic poetic traditions of the Caribbean archipelago.

The event will open with a reading conducted in the mode of a hip-hop cypher, with poets performing one poem at a time in cycles. The reading will be followed by a tertulia style discussion among the poets that will eventually open up to include all attendees.

Like the Caribbean Sea itself, we don’t know what routes this conversation will take, but the focus will be on poetry’s capacity to build and sustain bridges between the Latinx Caribbean and the non-Latinx Caribbean and its diaspora, to honor the ways in which the numerous cultures birthed in the Antilles have influenced and bolstered one another.

“…in the Caribbean, the “foreign” interacts with the “traditional” like a ray of light with a prism; that is, they produce phenomena of reflection, refraction, and decomposition. But the light keeps on being light furthermore, the eye’s camera comes out the winner, since spectacular optical performances unfold which almost always induce pleasure, or at least curiosity.”

Vincent Toro is a Puerto Rican poet, playwright, director, and educator. He is the author of two poetry collections: “STEREO.ISLAND.MOSAIC.” and “TERTULIA.” Vincent has been awarded the Poetry Society of America’s Norma Farber First Book Award, the Sawtooth Poetry Prize, the Caribbean Writer’s Cecile De Jongh Poetry Prize, and Repertorio Español’s Nuestras Voces Latino Playwriting Award. He is a professor of English at Bronx Community College, a Dodge Foundation poet, and a contributing editor at Kweli Literary Journal.

Canisia Lubrin is the author of The Dyzgraphxst and Voodoo Hypothesis, which was named a CBC Best Poetry Book, longlisted for the Gerald Lambert Award, the Pat Lowther Award, and a finalist for the Raymond Souster Award. She was a finalist for the Toronto Book Award for her fiction contribution to The Unpublished City: Vol 1 and 2019 Writer in Residence at Queen’s University. Lubrin holds an MFA in Creative Writing from the University of Guelph.

Christian Campbell is a Trinidadian Bahamian poet, essayist and cultural critic, and the author of Running the Dusk (Peepal Tree Press, 2010), which won the Aldeburgh First Collection Prize, was a finalist for the Forward Prize for the Best First Collection and the Cave Canem Prize among other awards. Running the Dusk was also translated into Spanish and published in Cuba as Correr el Crepúsculo (Ediciones Santiago, 2015). He lives in New York City.

Yesenia Montilla is an Afro-Latina poet & a daughter of immigrants. Her poetry has appeared in the Chapbook For the Crowns of Your Head, as well as the literary journals The Gulf Coast, Prairie Schooner, Pittsburgh Poetry Review & others. She received her MFA from Drew University in Poetry and Poetry in Translation & is a 2014 CantoMundo Fellow. Her first collection The Pink Box is published by Willow Books & was Longlisted for a PEN award in 2016. She lives in Harlem NY.

Christina Olivares is the author of the books of poetry No Map of the Earth Includes Stars, winner of the 2014 Marsh Hawk Press Book Prize, and Ungovernable, forthcoming from YesYes Books in 2020.  Olivares is a queer American-Cuban from the Bronx. She believes in the abolition of poverty and of the carceral state and in the radical project of imagining our liberation. She works as an educator.

Tiphanie Yanique is the author of the poetry collection, Wife, which won the 2016 Bocas Prize in Caribbean poetry and the United Kingdom’s 2016 Forward/Felix Dennis Prize for a First Collection. Tiphanie is also the author of the novel, Land of Love and Drowning and the short story collection, How to Escape from a Leper Colony, which won her a listing as one of the National Book Foundation’s 5 Under 35. She currently teaches English and Creative Writing at Emory College of Arts and Sciences.