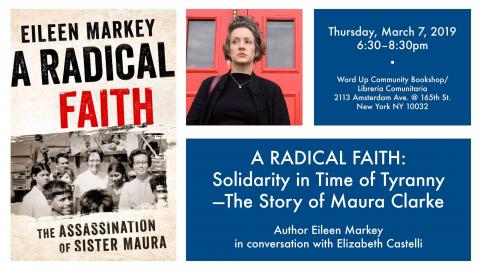 Join Eileen Markey, a Bronx-based journalist, Lehman College CUNY professor, and author of A Radical Faith: The Assassination of Sister Maura, in conversation with religion scholar and Word Up volunteer Elizabeth Castelli, for a reading and talk about the role of religious conviction in the Central American people’s movements of the 1970s and 80s and how they can inform our work today.

Drawing on archival research and hundreds of interviews with people usually ignored by historians, A Radical Faith tells a grassroots, woman-centered, poor people-centered story of Sr. Maura Clarke, MM, a Bronx-born, Queens-raised first generation North American woman who was killed in 1980 by the U.S.-trained military of El Salvador. The book traces Maura’s transformation from missionary to partner willing to take fundamental risks in the struggle for liberation. Inspired both by her religious faith and her father’s role in the anti-imperial Irish revolution, Maura dedicated herself to people’s movements in Nicaragua and El Salvador. The book explores topics deeply relevant for our current political moment: invested, committed allyship, models of community resistance, the disruptive powers of hope and personal relationships, and the root causes driving current Central American migration.

From Jacobin: "In this exhaustively researched and deeply loving biography, Markey ascribes radical agency to one of the victims of El Salvador’s civil war violence better known for her death than for her life’s work. In so doing, she reveals the key role played by people of faith, local and foreign, in the liberation movements that challenged both their domestic oppressors and their US backers…For Maura Clarke and so many others, the church was not the obstacle to their radicalization, but rather the vehicle. A Radical Faith charts the unlikely transformation of that most oppressive colonial emissary, the missionary, into an instrument of anti-imperialist solidarity."

Free event; $5 suggested donation will go toward supporting Word Up's in-store programming in 2019. A Q&A will follow the book reading and conversation. Books will be available for sale at the event, or may be purchased on our website at https://www.wordupbooks.com/book/9781568585734

A Radical Faith: The Assassination of Sister Maura (Hardcover)