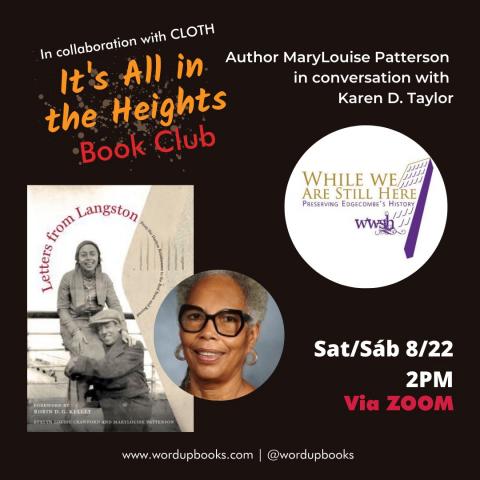 * REGISTER FOR THIS EVENT HERE *

Through its "Did You Know It's All in the Heights?" campaign, CLOTH celebrates local authors, local businesses, and local artists through book clubs curated by Sister's Uptown Bookstore and Cultural Center and Word Up Community Bookshop.

FEATURED BOOK:
Letters from Langston: From the Harlem Renaissance to the Red Scare and Beyond
https://www.wordupbooks.com/WUI9780520285347

ABOUT THE BOOK:
Langston Hughes, one of America's greatest writers, was an innovator of jazz poetry and a leader of the Harlem Renaissance whose poems and plays resonate widely today. This indispensable volume of letters between Hughes and four leftist confidants sheds vivid light on his life and politics.

Letters from Langston begins in 1930 and ends shortly before his death in 1967, providing a window into a unique, self-created world where Hughes lived at ease. This distinctive volume collects the stories of Hughes and his friends in an era of uncertainty and reveals their visions of an idealized world—one without hunger, war, racism, and class oppression.

ABOUT THE AUTHORS:
MaryLouise Patterson, a pediatrician in clinical practice, and Evelyn Louise Crawford, a retired arts administrator and consultant, are the daughters of Langston Hughes’s cherished friends. Hughes was a frequent guest in the homes of the two families and was like an uncle to Evelyn Louise and MaryLouise.

ABOUT THE INTERLOCUTOR:
Karen D. Taylor is the founder of While We Are Still Here, a 501(c)(3) organization that includes long-term residents of 409 and 555 Edgecombe Avenue—the average number of years of residence is thirty. Non-resident members are interested in helping to preserve the grand history of these important sites. WWSH was formed as a response to the threat that each building’s history would be lost and gone forever, partially due to the passing of time, and partially due to “gentrification,” which is rapidly altering the environment.
whilewearestillhere.org.

FEATURED ARTIST:
Emmanuel Abreu is an NYC photographer and videographer, based in Washington Heights/Inwood. He is community member who has been collaborating with local organizations to help bring social justice and creative spaces to the community.