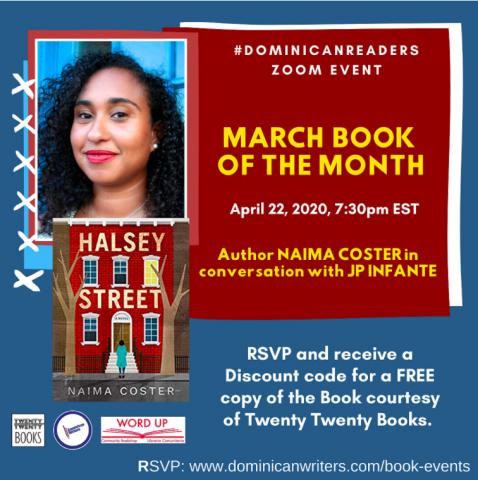 **VIRTUAL EVENT**
RSVP for the access link at dominicanwriters.com/event-info/dominicanreaders-author-talk-with-naima-coster.

Join #DominicanReaders Book Club, Word Up Community Bookshop, and TwentyTwenty Books for a talk with author Naima Coster, in conversation with JP Infante, about Naima's novel HALSEY STREET. RSVP to receive a discount code for a free copy of the book ordered through wordupbooks.com.

ABOUT HALSEY STREET
Penelope Grand has scrapped her failed career as an artist in Pittsburgh and moved back to Brooklyn to keep an eye on her ailing father. She's accepted that her future won't be what she'd dreamed, but now, as gentrification has completely reshaped her old neighborhood, even her past is unrecognizable. Old haunts have been razed, and wealthy white strangers have replaced every familiar face in Bed-Stuy. Even her mother, Mirella, has abandoned the family to reclaim her roots in the Dominican Republic. That took courage. It's also unforgivable.

When Penelope moves into the attic apartment of the affluent Harpers, she thinks she's found a semblance of family--and maybe even love. But her world is upended again when she receives a postcard from Mirella asking for reconciliation. As old wounds are reopened, and secrets revealed, a journey across an ocean of sacrifice and self-discovery begins.

An engrossing debut, HALSEY STREET shifts between the perspectives of these two captivating, troubled women. Mirella has one last chance to win back the heart of the daughter she'd lost long before leaving New York, and for Penelope, it's time to break free of the hold of the past and start navigating her own life.

------------------------------
ABOUT NAIMA COSTER
Naima Coster is an Afro-Dominican-American writer best known for her novels HALSEY STREET and WHAT'S MIND AND YOURS. Naima’s stories and essays have appeared in the New York Times, the Rumpus, Aster(ix), Kweli, The Paris Review Daily, and elsewhere. She has taught writing to students in jail, youth programs, and universities. She currently teaches in the MFA programs at City College in Harlem and Antioch University in L.A., as well as Catapult.

ABOUT JP INFANTE
JP is a high school teacher and writer in New York City. He’s taught at the City University of New York and teaches writing workshops throughout the city. His writing can be found in Kweli, The Poetry Project, Acentos Review, and elsewhere.

------------------------------
ABOUT OUR COLLABORATORS
Dominican Writers Association is a platform dedicated to supporting and promoting the works by CREATIVE writers of Dominican descent in the genres of Fiction, Poetry & Creative non-fiction. Our mission is to provide them the tools and resources to continue developing their craft and reach the heights of the literary cannon.

TwentyTwenty Books—named for both what we're poised to learn in the 2020 Census, and for the clarity provided by 20/20 vision—is a nonprofit literary organization whose mission is to ensure that Americans see, hear, and understand ourselves and each other through literature, leading to a better country.

This event was originally scheduled to take place at Word Up Community Bookshop but was moved online due to stay-at-home orders during the coronavirus pandemic.