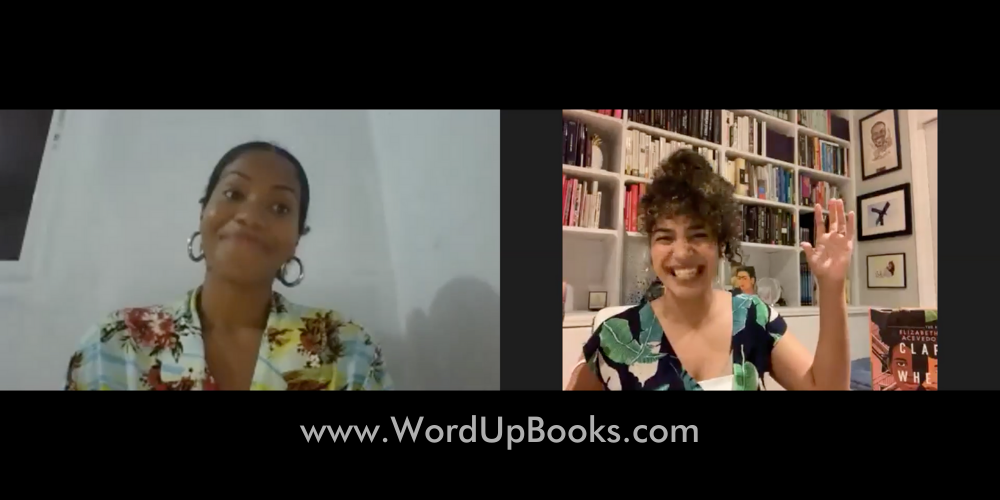 Thank you so much to everyone who attended last week’s virtual book launch of Clap When You Land with Elizabeth Acevedo and Melania-Luisa Marte. There were so many of you showing your love in the chat that it actually slowed down the video!

The event opened up with interpretation announcements, some words from organizers Dominican Writers Association and Word Up Community Bookshop, plus cosponsor Mami Chula Social Club. Then Melania-Luisa Marte, who was calling in from the mountains en la República Dominicana, where part of the novel takes place (!!) introduced Elizabeth Acevedo. Both Melania and Elizabeth are the audiobook narrators, so Elizabeth reminded everyone to “get used to [their] voices!”

Melania shared how emotional it was for her to read Clap When You Land the first time because of how impactful and emotional the year 2001 was for everyone, not just because of 9/11 but also because of the American Airlines Flight 587 that crashed two months after 9/11, and the fact that her own father died that same year. The flight was flying to Santo Domingo and plummeted almost immediately after taking off from JFK, killing 265 passengers, crew members, and people on the ground, becoming the second deadliest plane crash in American history. This plane crash immensely impacted the Dominican community.

Clap When You Land opens with a plane crash. Acevedo said she wanted to write about “this idea of grief,” about what “it mean[s] to have to mourn someone and be angry at someone, and also have to forgive them when they’re not there to ask for that. . . . What does it mean when your parents who are your heroes don’t live up to that, and can you reconcile that on your own. How do you become your own kind of hero, right? This novel began as a contemplation of . . . that moment in time . . . it felt like we had to hold ourselves because the world wasn’t checking for us.” After doing research about Flight 587 and discovering so many stories about her own community’s losses—“mining through your remains to try to figure out who you are”—she started putting together this idea with the fact that many people grow up to find out they have other siblings and family members.

Marte asked about how Acevedo “honored developing these two sisters” as one is darker than the other. Acevedo wanted to get away from the fact that both her first two characters had been “described as brown but lighter skinned” and wanted to acknowledged that Afro-Latinas are also darker skinned, or “negra” as the character Yahaira is called “throughout the entire book” with a sense of pride. Through this she also wanted to depict “that fierce love” between a mother and daughter no matter the difference between their complexions—which she experienced with her own mother. Having two narrators from different countries and backgrounds further shows the complications of discussing colorism and race in Dominican culture, as Acevedo wanted to “put on different hats as to what is the language you would have” based on where you grew up to talk about different subjects such as race, religion, and gender.

“My books aren’t about providing answers, that’s why you go to a textbook. My work is about asking questions, it’s about wondering, it’s about discovering delight.”

In developing the characters, Elizabeth shared that she almost included some cassettes that the father figure, Papi, left for his daughters. She ended up leaving out that element because it would show too much of his perspective, but “it allowed [Acevedo] to know him,” especially with his complexity as a man with two secret families that he loved dearly.

Melania asked about what was most difficult to write, and Acevedo said the ending: “[With] this book, more than my two other novels, I felt so inclined to try to offer a semblance of hope. If you’ve heard me speak you’re like, ‘Oh my god she’s always talkin’ about hope,’ . . . I don’t know that hope will save us but I do think when you’re writing about really heavy topics—particularly for and about young people of color—it feels so critical that when a young person leaves my book they feel held.”

As for what literary success looks like to Elizabeth Acevedo, it can be summed up with, “Don’t cut my mic off.”

Elizabeth then read the first passage of the novel, which is from the narrator Camino’s perspective, and is read by Melania-Luisa Marte in the audiobook. . . . The reading made me so excited to start reading this novel and annoyed that it hasn’t arrived yet.

During the proceeding audience Q&A, someone asked, “How do you figure out the next book you dedicate your time to?” Elizabeth replied that she doesn’t know what she will write next, but that she always has something going on on the back burner. When writing The Poet X, she had With The Fire on High done, plus an early version of Clap When You Land. As a writer, she’s always working on two things, allowing her creative brain to continuously work. “Commit yourself to the project that is most compelling but make sure you finish it.”

When asked about what advice she could give to English teachers and their students who want to read Clap When You Land, Acevedo highlighted the importance of context and history. Students should know about the Dominican Republic, specifically the area Sosúa, and Flight AA587. Knowing about the geography and community help to navigate the text, even if students are Dominican.

Someone else asked about if Elizabeth listened to music while she wrote and she said no, she needs quiet since she reads out loud, which Melania related to. Acevedo continued: “However, there are unofficial playlists that I’ve made on Spotify for every one of my books because I do try to build the world . . .”—including secret Pinterest boards!

Another attendee asked about the influence that Cave Canem had on Acevedo’s writing, as she spent two summers as a fellow. Acevedo said she loved it, especially since she attended an entirely white MFA program. It was important to her to go to writing workshops with people of color to “see folks who [she] was in conversation with” and know she’s “not writing in a vacuum.” She later mentioned that her MFA was a great way to focus on writing, especially when it was fully-funded, but is not necessary to being a writer.

The question about her role in the film production of her book came up and Acevedo said she has nothing to do with casting and is working on a screenplay of With The Fire on High, but would love “to do a Jenny Han and secretly appear in the back.” This was my first time finding out there was a film and it made me so excited!

Someone asked, “How can I encourage my students to be authentic and honest in their writing?” As an educator herself, Acevedo wanted teachers to know how important it is to for them to “demonstrate what that space looks like” by sharing their own work and to not make “assumptions about how honest people are being because, especially with young people, it can be hard to confront difficult things through writing in an academic setting for a teacher who grades you.”

When asked about her queer character in her new book, Acevedo said “I write queer characters in all of my books. It feels important to me to recognize that this is the community, these are the folks that live there, and although how that is accepted or treated may be different generation to generation, at least the generation or the future I aspire to is one where queer folk are main characters and are treated as much of a protagonist and as a viable protagonist without that being the central part of their stories.”

The night ended with Acevedo going back to a question about inspiration for young writers: “I find that part of being a writer is having a writer’s eye—how do you look at the same thing that everyone else looks at, but you’re continuously looking for what is the moment of human experience taking place here that I can put language to.” She expressed her happiness that this virtual book launch still happened with as much love, virtually, especially for this novel.