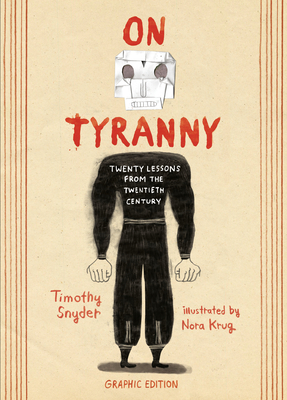 “Nora Krug has visualized and rendered some of the most valuable lessons of the twentieth century, which will serve all citizens as we shape the future.”—Shepard Fairey, artist and activist

Timothy Snyder’s New York Times bestseller On Tyranny uses the darkest moments in twentieth-century history, from Nazism to Communism, to teach twenty lessons on resisting modern-day authoritarianism. Among the twenty include a warning to be aware of how symbols used today could affect tomorrow (“4: Take responsibility for the face of the world”), an urgent reminder to research everything for yourself and to the fullest extent (“11: Investigate”), a point to use personalized and individualized speech rather than clichéd phrases for the sake of mass appeal (“9: Be kind to our language”), and more.

In this graphic edition, Nora Krug draws from her highly inventive art style in Belonging—at once a graphic memoir, collage-style scrapbook, historical narrative, and trove of memories—to breathe new life, color, and power into Snyder’s riveting historical references, turning a quick-read pocket guide of lessons into a visually striking rumination. In a time of great uncertainty and instability, this edition of On Tyranny emphasizes the importance of being active, conscious, and deliberate participants in resistance.

Timothy Snyder is the Housum Professor of History at Yale University and a member of the Committee on Conscience of the United States Holocaust Memorial Museum. He is the author of the bestselling books Bloodlands: Europe Between Hitler and Stalin and Black Earth: The Holocaust as History and Warning. His work has received the literature award of the American Academy of Arts and Letters, the Hannah Arendt Prize, and the Leipzig Book Prize for European Understanding. Snyder is a frequent contributor to The New York Review of Books and the Times Literary Supplement and a former contributing editor at The New Republic.

Nora Krug is the author of the graphic memoir Belonging and an associate professor at Parsons School of Design in New York. Her drawings and visual narratives have appeared in The New York Times, The Guardian, and Le Monde diplomatique. Her short-form graphic biography, Kamikaze, about a surviving Japanese World War II pilot, was included in editions of Best American Comics and Best American Nonrequired Reading. She is the recipient of fellowships from the Maurice Sendak Foundation, Fulbright, the John Simon Guggenheim Memorial Foundation, and the Pollock-Krasner Foundation, and of medals from the Society of Illustrators and the New York Art Directors Club.

“Timothy Snyder is brilliant. On Tyranny is a must read, a clear-eyed guidebook for anyone seeking to learn from history to help us understand the present. It is a manual for how to protect and preserve Democracy. The past teaches us that we, as individuals, must act to reaffirm and protect the freedoms and institutions that we collectively cherish. Listen, learn, be kind and courageous. This stunning new edition beautifully illustrated by Nora Krug makes the lessons jump off the page, into our hearts, filling us with the urgent imperative: act now, before it is too late.”—Ken Burns

“A more concise, profound, or essential book on the subject does not exist. Snyder’s masterwork is a stunning reminder of the myriad, insidious forms oppression takes. Now beautifully illustrated by Nora Krug, On Tyranny is a bellwether for what we must be awake to, and fight against.”—J.J. Abrams, filmmaker, Star Trek and Star Wars: The Force Awakens

“Timothy Snyder’s On Tyranny is already an essential read, but the book’s analysis of the mechanics of authoritarianism, fascism, and other forms of tyranny is even more potently delivered in its graphic edition, illustrated by Nora Krug. Krug’s playful but powerful and evocative drawings and diagrams amplify the important ideas in On Tyranny and serve as the sugar to help the reader digest the medicine of the book’s cautionary look at threats to democracy. We are often told to visualize things that are crucial to commit to memory. In the graphic edition of On Tyranny, Nora Krug has visualized and rendered some of the most valuable lessons of the 20th century which will serve all citizens as we shape the future.”—Shepard Fairey, artist and activist

“On Tyranny is one of the most important books of our time, and Krug enriches Snyder's powerful, accessible text with a transcendent humanity. This book should be read and experienced by everyone, its lessons carved into our hearts.”—Nate Powell, graphic novelist, March and Save It for Later

“It is impossible to overstate the urgency of Timothy Snyder’s handbook for recognizing and resisting the normalization of barbarism. Nora Krug illustrates with soulful beauty and the moral clarity of an artist who never flinches. The combination is as hopeful as it is devastating. Krug’s illustrated edition of On Tyranny is more than an instant classic. It is an act of resistance—and a gift of love.”—Joshua Oppenheimer, filmmaker, The Act of Killing and The Look of Silence