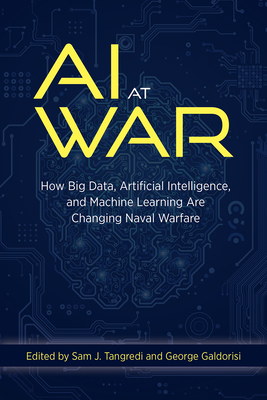 Artificial intelligence (AI) may be the most beneficial technological development of the twenty-first​ century, but it is often misunderstood outside of specialists in the field. AI at War provides a balanced and practical understanding of this dawning new technology, explaining the importance of machine learning, human-machine interfaces, and big data analysis, components that are often omitted or misunderstood. While AI has many potential applications, Tangredi and Galdorisi have brought together more than thirty experts to focus on those elements relating to national security, making clear the importance and the potential of AI in defending the nation and in warfighting. Contributors include Robert Work, former Deputy Secretary of Defense; Admiral James Stavridis, former Commander, Supreme Allied Commander Europe; Admiral Michael Rogers, former Director of the National Security Agency; and Admiral Scott Swift, former Commander of the U.S. Pacific Fleet; as well as scientists and operators who share their theoretical and experiential knowledge of this game-changing new field.​

Sam J. Tangredi is the Leidos Chair of Future Warfare Studies and professor of national, naval, and maritime strategy at the U.S. Naval War College. A U.S. Naval Academy and Naval Postgraduate School graduate, he earned a PhD in international relations from the University of Southern California. He served a thirty-year naval career as a surface warfare officer and as a strategic planner and leader of strategic planning. He is author of Anti-Access Warfare: Countering A2/AD Strategies. George Galdorisi is the Director of Strategic Assessments and Technical Futures at the Naval Information Warfare Center Pacific. He speaks and writes frequently on the operational uses of big data, artificial intelligence, and machine learning. Prior to joining NIWC Pacific, he completed a thirty-year career as a naval aviator including four command tours and five years as a carrier strike group chief of staff. He has written a total of fourteen books published by mainstream publishers, including four consecutive New York Times best-sellers.