Minnesota, 1918: When Flu, Fire, and War Ravaged the State (Paperback) 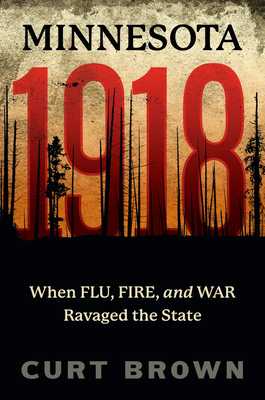 In 1918, Minnesota and its residents were confronted with a series of devastating events that put communities to the test, forcing them to persevere through untold hardship. First, as the nation immersed itself in the global conflict later known as World War I, some 118,000 Minnesotans served in the war effort, both at home and "over there"-and citizens on the home front were subjected to loyalty tests and new depths of government surveillance. While more than 1,400 Minnesotans were killed on the battlefields, an additional 2,300 soldiers were struck down by another destructive force working its way across the globe in 1918: the influenza pandemic, which left more than 10,000 dead in Minnesota alone. Then, in mid-October, fires raged across 1,500 square miles in seven counties of northeastern Minnesota, leaving thousands homeless and hundreds dead.

In Minnesota, 1918, journalist and author Curt Brown explores this monumental year through individual and community stories from all over the state, from residents of small towns up north obliterated by the fire, to government officials in metropolitan centers faced with the spread of a deadly and highly contagious disease, to soldiers returning home to all this from the "war to end all wars.