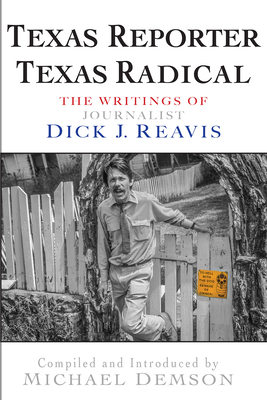 Writing about Texas, Mexico, and Texan-Mexican relations for over four decades, Dick J. Reavis is one of the most poignant political voices of Texas—not as a politician, though his writings are infused with politics, but as a candid, unsentimental, probing, journalist. Reavis has worked as a reporter, features author, and staff writer (San Antonio Express-News, Fort Worth Star-Telegram, Dallas Observer, San Antonio Light), as a Senior Editor of Texas Monthly, and as a professor of journalism (North Carolina State University). He has authored six books and translated two from Spanish. Throughout his award-winning career, he has returned consistently to investigate the lives of everyday Texans, insistently challenging prevailing political assumptions and mythologies. It was precisely this commitment that prompted him to investigate the federal government’s siege of the Branch Davidians in 1993 outside of Waco, TX, which led to his best-known work, The Ashes of Waco: An Investigation (1995), a book that challenged government accounts and mainstream media. This anthology demonstrates the range of his writings, which include investigations of Mexican guerillas and Texas biker-gangs, the struggles of urban day-laborers and of undocumented immigrants in rural areas, the politics of Texas radicals during the Civil Rights movement, and the activities of the Klan and other far right groups across the state, to identify but a few. This collection of Reavis’s writings brings into focus the voice and political commitments of this critical, contemporary, Texas writer.

DICK J. REAVIS has authored six books, including The Ashes of Waco: An Investigation (1995) on the FBI/ATF siege of the Branch Davidians outside of Waco, Texas. Reavis has written hundreds of articles for Texas and national newspapers and magazines, including The Texas Observer, San Antonio Express-News, Fort Worth Star-Telegram, Dallas Observer, San Antonio Light, Texas Parks & Wildlife, Soldier of Fortune, Salon.com, and the Wall Street Journal, and he is a former staff writer and senior editor at Texas Monthly. Over his decades-long career, he has explored such diverse topics as motorcycle gangs, the Southern Civil Rights Movement, guerrillas, convicts, undocumented immigrants, and Mexican coal miners.

MICHAEL DEMSON is an Associate Professor of English at Sam Houston State University whose research explores the intersections of literature and radical political cultures. His recent publications include two collections of essays on Romantic literature, Romantic Automata: Exhibitions, Figures, Organisms, Commemorating (2020), and Peterloo: Violence, Resilience, and Claim-making in the Romantic Era (2019). He is also interested in popular radical graphic narratives, recently collaborating on an English translation of Me, Mikko, and Annikki (2019), a Finnish graphic novel by Tiitu Takalo. His own graphic novel, Masks of Anarchy: From Percy Shelley to the Triangle Shirtwaist Factory Fire, illustrated by Summer McClinton, was published in 2013. He has published widely in academic journals.

“There has never been a Texas journalist like Dick Reavis. His self-described ‘lack of refinement’ has reliably guided him to stories about every sort of outcast, from revolutionaries to the criminally insane to the doomed members of an apocalyptic cult. He writes about these people with matter of fact empathy, from deep inside their worlds, never judging, never sentimentalizing or showboating. This book is an important record of a unique and courageous voice.”
—Stephen Harrigan

“This collection represents the best of Dick Reavis’s remarkable journalistic career, covering decades’ worth of reporting on race relations, immigration, labor, and social movements in Texas and the nation.”
—Eladio B. Bobadilla

“My friend Dick Reavis has the soul of a poet. Everything he has written is a work of literary merit, as this fine collection of his political writing demonstrates. There’s an urgency to his work that makes it compelling. Plus he’s been a first-hand witness to (and at times a participant in) significant radical drama. Therefore these accounts have historic value. Texas Reporter, Texas Radical is a first-rate work by a first-rate writer.”
—W. K. (Kip) Stratton, author of the Los Angeles Times bestselling The Wild Bunch and Fellow of the Texas Institute of Letters

“Dick J. Reavis, who survived a head-on collision while on his motorcycle, is one of the toughest writers Texas has ever produced. He’s also one of the best. This treasury of his fearless, sharp-eyed reporting brings previously marginalized people roaring to life.”
—Steven L. Davis, Wittliff Collections Curator and Past President, Texas Institute of Letters

“Dick J. Reavis is the real deal—the most courageous, incisive, and clear-eyed journalist you'll ever meet. This collection of his work is a joy to read, and a must read for anyone who wants to understand Texas and America in true to life terms.”
—Harry Hurt III, author of Texas Rich: The Hunt Dynasty From the Early Oil Days Through the Silver Crash, and Lost Tycoon: The Many Lives of Donald J. Trump