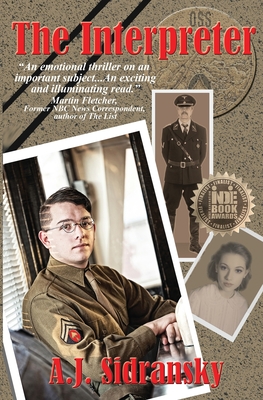 Kurt Berlin, a 23-year-old American soldier fighting the Japanese in the Philippines in March of 1945 is recruited by the OSS to return to Europe as an interpreter for the interrogations of captured Nazi officers. Having escaped the horrors of Nazi Europe in 1940, he is reluctant to return, but he has his own agenda. He wants to find Elsa Graz, the girl he left behind. Upon returning to Brussels he begins his search for her. His efforts hit a dead end. Soon after he discovers during an interrogation of an SS Captain that the prisoner knows the young girl. He is probably the only person alive who knows her whereabouts. How will Kurt learn her whereabouts from this unrepentant Nazi? The question for Kurt is whether his moral compass is strong enough to survive the whirlwind which is about to overtake him. The Interpreter is told in two story lines, the first between March and July of 1945 follows Kurt's journey to find Elsa. The second recounts Kurt's perilous escape from Nazi occupied Europe from March of 1939 to July of 1941. Partially based on true events, The Interpreter is a historical thriller wrapped in a romance, certain to keep you turning the pages.