The Time Traveler's Guide to Regency Britain: A Handbook for Visitors to 1789–1830 (Hardcover) 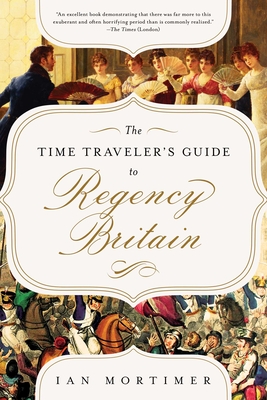 A vivid and immersive history of Georgian England that gives its reader a firsthand experience of life as it was truly lived during the era of Jane Austen, Percy Bysshe Shelley, and the Duke of Wellington.

This is the age of Jane Austen and the Romantic poets; the paintings of John Constable and the gardens of Humphry Repton; the sartorial elegance of Beau Brummell and the poetic license of Lord Byron; Britain's military triumphs at Trafalgar and Waterloo; the threat of revolution and the Peterloo massacre. In the latest volume of his celebrated series of Time Traveler's Guides, Ian Mortimer turns to what is arguably the most-loved period in British history: the Regency, or Georgian England.

A time of exuberance, thrills, frills and unchecked bad behavior, it was perhaps the last age of true freedom before the arrival of the stifling world of Victorian morality. At the same time, it was a period of transition that reflected unprecedented social, economic, and political change. And like all periods in history, it was an age of many contradictions—where Beethoven's thundering Fifth Symphony could premier in the same year that saw Jane Austen craft the delicate sensitivities of Persuasion.

Once more, Ian Mortimer takes us on a thrilling journey to the past, revealing what people ate, drank, and wore; where they shopped and how they amused themselves; what they believed in, and what they feared. Conveying the sights, sounds, and smells of the Regency period, this is history at its most exciting, physical, visceral—the past not as something to be studied but as lived experience.

Dr. Ian Mortimer has been described by the London Times as "the most remarkable medieval historian of our time." He is the author of The Time Traveler's Guide to Restoration Britain and Outcasts of Time, both available from Pegasus Books. He was awarded the Alexander Prize by the Royal Historical Society and is a Fellow of both the Royal Historical Society and the Society of Antiquaries. Please visit his website at www.ianmortimer.com. He lives in England.

Advance praise for The Time Traveler’s Guide to Regency Britain

“An excellent book demonstrating that there was far more to this exuberant and often horrifying period than is commonly realized.”
— The Times (London)

"Ian Mortimer has made this kind of imaginative time travel his specialty.”
— The Daily Mail

"Ian Mortimer's Time Traveler's Guide to Regency Britain tells you all you need to know about criminals, disease, beggars, and other late Georgian delights if you ever find yourself visiting the 1790s.”
— Simon Heffer, The Daily Telegraph, A Book of the Year

“British historian Mortimer, who has already struck gold with delightful guides to Elizabethan and medieval Britain, takes on the Regency. Deliciously revealing research… No reader should miss his take on the era’s hygiene, diet, medicine, treatment of women, fashion, travel, theater, and music. There was even a musical superstar: Beethoven. Anglophiles will love it all. Everything you ever wanted to know about Regency life.”
— Kirkus Reviews

“Mortimer walks readers through the cities, towns, and rural landscape of Britain as if presenting a down-to-earth, how-to guide for time-travelers to the era. The sounds, smells, textures, and nightscapes are brought to incredibly vivid life, fully immersing readers into the quotidien worlds of everyone from the monarchy, aristocracy, and landed gentry to the middle classes, working classes, and the destitute. Written in very accessible language, this is sure to be a favorite for history lovers, historical fiction readers, and fans of all sorts of travelogues.”
— Booklist