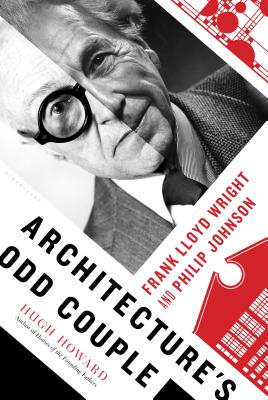 By Hugh Howard
Not Available
Out of Print

In architectural terms, the twentieth century can be largely summed up with two names: Frank Lloyd Wright and Philip Johnson. Wright (1867–1959) began it with his romantic prairie style; Johnson (1906–2005) brought down the curtain with his spare postmodernist experiments. Between them, they built some of the most admired and discussed buildings in American history.

Differing radically in their views on architecture, Wright and Johnson shared a restless creativity, enormous charisma, and an outspokenness that made each man irresistible to the media. Often publicly at odds, they were the twentieth century's flint and steel; their repeated encounters consistently set off sparks. Yet as acclaimed historian Hugh Howard shows, their rivalry was also a fruitful artistic conversation, one that yielded new directions for both men. It was not despite but rather because of their contentious--and not always admiring--relationship that they were able so powerfully to influence history.

In Architecture's Odd Couple, Howard deftly traces the historical threads connecting the two men and offers readers a distinct perspective on the era they so enlivened with their designs. Featuring many of the structures that defined modern space--from Fallingwater to the Guggenheim, from the Glass House to the Seagram Building--this book presents an arresting portrait of modern architecture's odd couple and how they shaped the American landscape by shaping each other.

Hugh Howard's numerous books include Mr. and Mrs. Madison's War: America's First Couple and the War of 1812; The Painter's Chair: George Washington and the Making of American Art; Dr. Kimball and Mr. Jefferson; the definitive Thomas Jefferson: Architect; his memoir House-Dreams; and the classic Houses of the Founding Fathers. He resides in upstate New York.

"The prolific Howard offers up another sterling book of popular history . . . New light is shed on both architects in this absorbing, well-organized, delightfully told story." - Kirkus Reviews

"Narrative non-fiction of a high order, enlivened by anecdotes and quotations from two very outspoken and colorful characters." - Publishers Weekly

"[An] engaging dual portrait . . . written with wit and flair and supported by solid research . . . [A] thoughtful and well-built book." - Booklist

"Howard’s book is about the on-again off-again relationship between Wright and Philip Johnson, a pairing that a novelist couldn’t have improved upon . . . a lively and insightful chapter of American architectural history." - Buffalo News

"[Howard] paints an expert picture of the relationship, during which the architects challenged each other and ultimately produced some of the nation’s most enduring architectural works." - Architectural Digest

"In lively, scintillating prose, Hugh Howard brings to life one of the most inventive and original architects of the last century, and one of the savviest players in the same profession . . . Architecture’s Odd Couple is a splendid addition to the literature depicting the birth of twentieth-century modernism." - Nicholas Fox Weber, author of LE CORBUSIER: A LIFE

"A page turner about two architects and there’s no bloodshed! Hugh Howard brings to life the rivalry between these two giants of the world’s most egotistical profession and still gives us a happy ending." - Bob Vila

"As historian Hugh Howard reveals in this page-turner, the rivalry between the two outspoken, charismatic men is what drove them to creative heights and earned them such influence and legacy in architecture. Told with novelistic flair, the narrative charts the historical threads that connected the duo and captures the era they helped shape so emphatically." - Metropolis

"Entertaining, full of colorful vignettes and fascinating details . . . New information about both men and their work is captivatingly shared by this talented storyteller." - Missourian

"The attraction of a Wright-Johnson pairing becomes apparent as Howard sketches in the details and the congruences pile up." - New York Times Book Review