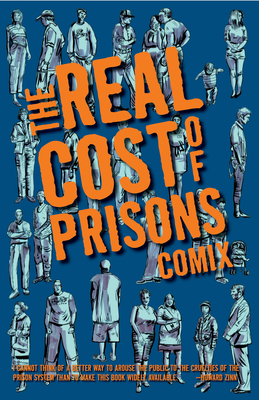 One out of every hundred adults in the U.S. is in prison. This book provides a crash course in what drives mass incarceration, the human and community costs, and how to stop the numbers from going even higher. This volume collects the three comic books published by the Real Cost of Prisons Project. The stories and statistical information in each comic book is thoroughly researched and documented.

Prisoners of the War on Drugs includes the history of the war on drugs, mandatory minimums, how racism creates harsher sentences for people of color, stories on how the war on drugs works against women, three strikes laws, obstacles to coming home after incarceration, and how mass incarceration destabilizes neighborhoods.

Prisoners of a Hard Life: Women and Their Children includes stories about women trapped by mandatory sentencing and the "costs" of incarceration for women and their families. Also included are alternatives to the present system, a glossary and footnotes.

Over 125,000 copies of the comic books have been printed and more than 100,000 have been sent to families of people who are incarcerated, people who are incarcerated and to organizers and activists throughout the country. The book includes a chapter with descriptions about how the comix have been put to use in the work of organizers and activists in prison and in the "free world" by  ESL teachers, high school teachers, college professors, students, and health care providers throughout the country. The demand for them is constant and the ways in which they are being used is inspiring.

"The Real Cost of Prisons comics are among the most transformative pieces of information that the youth get to read. We take it with us to detention centers, group homes, youth shelters and social justice organizing projects. Everywhere we go we see youth nodding with agreement and getting excited to see their reality validated in print."  — Shira Hassan, codirector, Young Women's Empowerment Project, Chicago

"Through powerful graphics and a wealth of grim statistics The Real Cost of Prisons Comix depicts how the past 30 years of unprecedented prison growth have reshaped the landscape of our urban and rural communities. By showing the concrete work that goes into building and maintaining the prison-industrial complex—from the peddlers of fear to the parole officer—the book serves as a smart, accessible primer on the politics and economics driving prison expansion."  —ColorLines #52

"I cannot think of a better way to arouse the public to the cruelties of the prison system than to make this book widely available."  —Howard Zinn

"There cannot be a prison-building moratorium or abolition movement without a voice advocating in such a way that reaches those most impacted by the system of incarceration. These comic books are that voice and an important contribution to that movement." —Jalil Muntaqim, political prisoner

"With more and more older people going to prison there is a growing demand for educational materials to keep their minds alive and well amid the deadening atmosphere of the American correctional system . . . There are all sorts of projects afoot in this area, but one is of special interest. It is called the Real Cost of Prisons."  —James Ridgeway, journalist

"Teaching others the cost of prisons in comic form is a brilliant idea! This book deserves to be spread to the masses on the inside and outside."  —make/shift magazine