Undocumented: A Dominican Boy's Odyssey from a Homeless Shelter to the Ivy League (Hardcover) 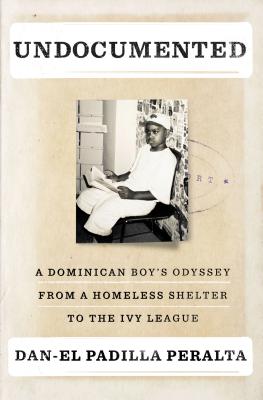 Dan-el Padilla Peralta has lived the American dream. As a boy, he came here legally with his family. Together they left Santo Domingo behind, but life in New York City was harder than they imagined. Their visas lapsed, and Dan-el’s father returned home. But Dan-el’s courageous mother was determined to make a better life for her bright sons.

Without papers, she faced tremendous obstacles. While Dan-el was only in grade school, the family joined the ranks of the city’s homeless. Dan-el, his mother, and brother lived in a downtown shelter where Dan-el’s only refuge was the meager library. There he met Jeff, a young volunteer from a wealthy family. Jeff was immediately struck by Dan-el’s passion for books and learning. With Jeff’s help, Dan-el was accepted on scholarship to Collegiate, the oldest private school in the country.

There, Dan-el thrived. Throughout his youth, Dan-el navigated these two worlds: the rough streets of East Harlem, where he lived with his brother and his mother and tried to make friends, and the ultra-elite halls of a Manhattan private school, where he could immerse himself in a world of books and where he soon rose to the top of his class.

From Collegiate, Dan-el went to Princeton, where he thrived, and where he made the momentous decision to come out as an undocumented student in a Wall Street Journal profile a few months before he gave the salutatorian’s traditional address in Latin at his commencement.

Undocumented is a classic story of the triumph of the human spirit. It also is the perfect cri de coeur for the debate on comprehensive immigration reform.

“Dan-el Padilla Peralta’s story is as compulsively readable as a novel, an all-American tall tale that just happens to be true. From homeless shelter to Princeton, Oxford, and Stanford, through the grace not only of his own hard work but his mother’s discipline and care, he documents the America we should still aspire to be.” —Dr. Anne-Marie Slaughter, President of the New America Foundation

Minneapolis Star Tribune:
“Undocumented is an impassioned counterargument to those who feel, as did some of Peralta’s more xenophobic classmates that “illegals” are good-for-nothings who take jobs from Americans and deserve to be kicked out of the country. No one who reads this story of a brilliant young man and his proud mother will automatically equate undocumented immigrant with idle parasite. That stereotype is something else we shouldn’t take for granted.”

New York Daily News:
“Undocumented is not meant to be a ‘whole hood-boy-in richy-rich-school saga.’ Peralta is merely determined to put another face to the undocumented millions, that of the son of an illegal who reached the highest pinnacle of privileged education.”

Library Journal:
“Peralta’s simple and unadorned yet fast-moving narrative provides an insightful read for anyone passionate about immigration reform.”

Dr. Anne-Marie Slaughter, President of the New America Foundation:
“Dan-el Padilla Peralta’s story is as compulsively readable as a novel, an all-American tall tale that just happens to be true. From homeless shelter to Princeton, Oxford, and Stanford, through the grace not only of his own hard work but his mother’s discipline and care, he documents the America we should still aspire to be.”

Julia Alvarez, author of In the Time of the Butterflies and A Wedding in Haiti:
“Dan-el Padilla Peralta's Undocumented should be required reading for every congressman addressing legislation on immigration and for anyone who believes the American dream should not be a nightmare for those who are now faceless, homeless, and helpless in our midst.  It should be required reading in our schools, not just to educate the new leaders of America on these issues, but to inspire them to tell lively stories that captivate the imagination, inform the mind, and move the heart to act."