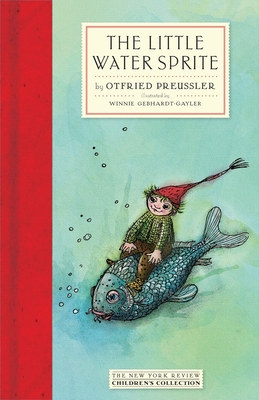 One spring day, the little Water Sprite is born in a house of reeds at the bottom of a mill pond. Duckweed soup, pickled water fleas, and other dainties are served to celebrate. The little Water Sprite grows up quickly, and soon he is bored of gazing out the window at the newts and fish swimming by. There is a whole new world to see outside his living room, and the little Water Sprite is determined to explore it! In the pond he makes friends with Cyprian the carp and encounters the fearsome nine-eyed lamprey, but his most thrilling adventures await him on dry land.

Otfried Preussler (1923–2013) was born into a family of teachers in Reichenberg, Czechoslovakia, and as a boy loved listening to the folktales of the region. Drafted into the army during World War II, Preussler was captured in 1944 and spent the next five years as a prisoner of war in the Tatar Republic. After his release, he moved to Bavaria and became a primary--school teacher and principal, supplementing his income by working as a reporter for a local newspaper and by writing scripts for children’s radio. One of the most popular authors for children in Germany, Preussler was twice awarded the German Children’s Book Prize. His many books have been translated into fifty-five languages and have sold over fifty million copies. New York Review Books also publishes Preussler’s Krabat & the Sorcerer’s Mill and The Little Witch and will publish The Robber Hotzenplotz in 2016.

Anthea Bell is a translator from the German, French, and Danish, and the winner of the Independent Foreign Fiction Prize, the Helen and Kurt Wolff Prize, and, three times over, the Marsh Award for Children’s Literature in Translation. She has translated Asterix, Hans Christian Andersen, Cornelia Funke, Kerstin Gier, W.G. Sebald, Sigmund Freud, and several novels by Otfried Preussler.

Winnie Gebhardt-Gayler (1929–2014) was a German illustrator who was a frequent collaborator with Otfried Preussler.

"An enchanting fantasy about the life of a young water sprite growing up in the cool green world of the mill pond. Endowed with a daring spirit, this lively little sprite ventures into many exciting and amusing episodes, including a trip with a strong current over the mill wheel, a joke played on a naive fisherman which saves Cyprian the Carp, a punishment for contracting dry feet, and a host of additional pranks, games and adventures calculated to delight and entertain.” —Kirkus Reviews

"Elements of folklore in Preussler's books are intertwined with conversations, funny dialogue, discussions of old and young, and angry disputes that are rooted in the everyday life of families and school. Preussler revealed...that he possessed an almost inexhaustible fantasy, an unfailing sense of humor and situation comedy. German children between the ages of four and twelve are still his fans." --Horst Kunneman, Bookbird