A Radical Faith: The Assassination of Sister Maura (Hardcover) 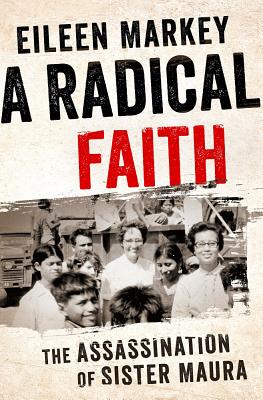 On a hot and dusty December day in 1980, the bodies of four American women-three of them Catholic nuns-were pulled from a hastily dug grave in a field outside San Salvador. They had been murdered two nights before by the US-trained El Salvadoran military. News of the killing shocked the American public and set off a decade of debate over Cold War policy in Latin America. The women themselves became symbols and martyrs, shorn of context and background.

In A Radical Faith, journalist Eileen Markey breathes life back into one of these women, Sister Maura Clarke. Who was this woman in the dirt? What led her to this vicious death so far from home? Maura was raised in a tight-knit Irish immigrant community in Queens, New York, during World War II. She became a missionary as a means to a life outside her small, orderly world and by the 1970s was organizing and marching for liberation alongside the poor of Nicaragua and El Salvador.

Maura's story offers a window into the evolution of postwar Catholicism: from an inward-looking, protective institution in the 1950s to a community of people grappling with what it meant to live with purpose in a shockingly violent world. At its heart, A Radical Faith is an intimate portrait of one woman's spiritual and political transformation and her courageous devotion to justice.

Eileen Markey is the editor of Without Compromise, an anthology by Village Voice muckrakerWayne Barrett, and the author of A Radical Faith: The Assassination of Sister Maura. She isan assistant professor of journalism at Lehman College of the City University of New York and a veteran NYC policy reporter who has also reported from Haiti, Nicaragua, El Salvador, Cambodia and the U.S. Mexico border. She has written for, among others, The Daily Beast, The New Republic,The New York Times, City Limits, The Daily News, New York Magazine, The Wall Street Journal and The Village Voice. Markey worked as a reporter and producer at WNYC New York Public Radio. She has lectured widely on the role of religion in radical social movements. Her work today focuses on the role of public memory in shaping allegiances. She lives with her family in the Bronx.

"In death, Maryknoll Sister Maura Clarke became known as a symbol of the brutality of El Salvador's pitiless conflict in the 1980s. In this rare and beautiful book, Eileen Markey brings Maura to life. From her childhood in a tightly knit Irish Catholic neighborhood to her departure for Nicaragua in 1959 and subsequent murder in El Salvador, Maura's life became interwoven with the tumultuous history of Cold War Central America. Drawing on personal correspondence and extensive interviews, Markey skillfully evokes the transformation of the Catholic Church during those turbulent decades, crafting a searing testament to the meaning of faith amidst the hard choices imposed by desperate circumstances."
—Cynthia Arnson, Director, Latin American Program, Woodrow Wilson International Center for Scholars

"A Radical Faith brings excitement, tension, and compassion to an overlooked story...Rich details and solid storytelling convey one nun's story of her dedication to God and her fellow humans."
—Kirkus Reviews

"I've always believed that responsibility, honesty, and faith are the three pillars of a strong character. Sister Maura Clarke, who recognized the humanity in everyone she met-from schoolchildren in the Bronx to farmers in Nicaragua-lived a life that served as a testament to that strength. Eileen Markey's beautifully told narrative reminds us of Maura's courage in the face of brutal dictators and shocking suffering. It's an important story that has been forgotten for too long, and Markey's book returns Maura to her deserved place in history."
—Martin Sheen