The Woman I Kept to Myself (Hardcover) 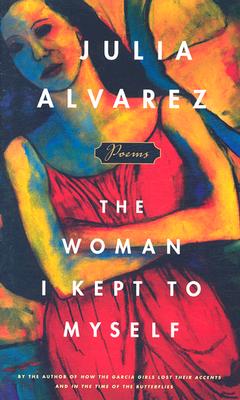 The works of this award-winning poet and novelist are rich with the language and influences of two cultures: those of the Dominican Republic of her childhood and the America of her youth and adulthood. They have shaped her writing just as they have shaped her life. In these seventy-five autobiographical poems, Alvarez’s clear voice sings out in every line. Here, in the middle of her life, she looks back as a way of understanding and celebrating the woman she has become.

Julia Alvarez left the Dominican Republic for the United States in 1960 at the age of ten. She is the author of six novels, three books of nonfiction, three collections of poetry, and eleven books for children and young adults. Her work has garnered wide recognition, including the 2013 National Medal of Arts, a Latina Leader Award in Literature in 2007 from the Congressional Hispanic Caucus Institute, the 2002 Hispanic Heritage Award in Literature, the 2000 Woman of the Year by Latina magazine, and inclusion in the New York Public Library’s 1996 program "The Hand of the Poet: Original Manuscripts by 100 Masters, From John Donne to Julia Alvarez." In 2013, President Obama awarded her a National Medal of Arts. Alvarez has taught and mentored writers in schools and communities across America, most recently as a writer-in-residence at Middlebury College, until her retirement in 2016. For many years, she and her husband, Bill Eichner, ran Finca Fundación Alta Gracia, an organic coffee farm-literacy arts center they established in her Dominican homeland. She is a co-founder and convener of Border of Lights, a collective of activists committed to promoting peace and solidarity between the Dominican Republic and Haiti. In 2009, In the Time of the Butterflies was selected by the National Endowment for the Arts for its national Big Read program.

“Charming and intense at the same time, Alvarez writes candidly of epic concerns and everyday realities in this unfailingly lucid collection of autobiographical poems.” —Booklist

“The poems are, like precious moments in life, nuggets to be savored and reflected upon.” —The Dallas Morning News