On the Origin of Form: Evolution by Self-Organization (Paperback) 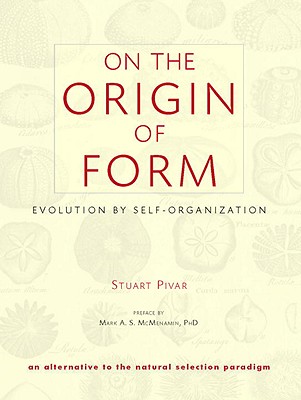 By Stuart Pivar, Mark A.S. Ph.D McMenamin (Preface by), Richard Milner (Afterword by), Stephen Jay Gould (Contributions by)
Not Available
Out of Print

On the Origin of Form presents a new account of evolution and the origin of life based on the premise that the body form of any species is encoded not in the DNA but in the patterned structure of the primordial germ plasm—the universal predecessor of the egg.

Two hundred years after Johann von Goethe’s Faustian quest for the Urform, the archetypal design underlying all living form, comes the recent discovery that organic forms are derived from a unique, self-organized, pre-embryonic structure. This explanation of evolution is an alternative to the now widely questioned Neo-Darwinist theory of natural selection of random mutations. This new model is based on known, relatively uncomplicated scientific principles and is easily accessible to the interested layman. Included are sixty-four pages of illustrations that support this new theory. For additional information, please visit www.ontheoriginofform.com.

Stuart Pivar is a chemist and engineer and founder of the New York Academy of Art in New York City. In 1996 he founded the Human Blueprint Laboratory to investigate the origins of form. He lives in New York City.

"Stuart Pivar’s book, On the Origin of Form, contains ideas that deserve full scientific scrutiny, especially in light of the turmoil roiling evolutionary biology at present. Pivar is presenting, in a series of brilliantly rendered graphical diagrams that show his interpretation of how modifications of a torus shape can generate a vast panoply of biotic form, a new theory of morphogenesis.... This is a seismic event for science. Conventional evolutionary biologists are right to be very worried about this, because it has the potential to trigger the complete collapse of Modern Synthesis Biology."
—Mark A. S. McMenamin, PhD, Paleontologist, Professor of Geology, Chair of Earth and Environment, Mount Holyoke College

"This is the discovery of the connection between the laws of physics and the complexity of life."
—Murray Gell-Mann, PhD, Distinguished Fellow, Santa Fe Institute, Nobel Laureate