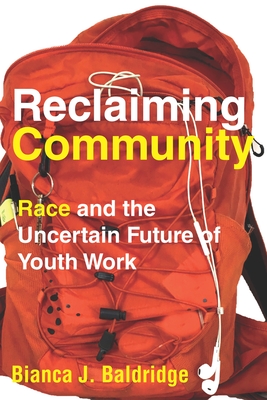 Approximately 2.4 million Black youth participate in after-school programs, which offer a range of support, including academic tutoring, college preparation, political identity development, cultural and emotional support, and even a space to develop strategies and tools for organizing and activism. In Reclaiming Community, Bianca Baldridge tells the story of one such community-based program, Educational Excellence (EE), shining a light on both the invaluable role youth workers play in these spaces, and the precarious context in which such programs now exist.

Drawing on rich ethnographic data, Baldridge persuasively argues that the story of EE is representative of a much larger and understudied phenomenon. With the spread of neoliberal ideology and its reliance on racism--marked by individualism, market competition, and privatization--these bastions of community support are losing the autonomy that has allowed them to embolden the minds of the youth they serve. Baldridge captures the stories of loss and resistance within this context of immense external political pressure, arguing powerfully for the damage caused when the same structural violence that Black youth experience in school, starts to occur in the places they go to escape it.

Bianca J. Baldridge is Assistant Professor in the Department of Educational Policy Studies at the University of Wisconsin-Madison.