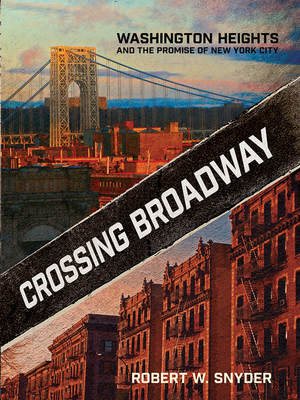 Robert W. Snyder's Crossing Broadway tells how disparate groups overcame their mutual suspicions to rehabilitate housing, build new schools, restore parks, and work with the police to bring safety to streets racked by crime and fear. It shows how a neighborhood once nicknamed Frankfurt on the Hudson for its large population of German Jews became Quisqueya Heights--the home of the nation's largest Dominican community.

The story of Washington Heights illuminates New York City's long passage from the Great Depression and World War II through the urban crisis to the globalization and economic inequality of the twenty-first century. Washington Heights residents played crucial roles in saving their neighborhood, but its future as a home for working-class and middle-class people is by no means assured. The growing gap between rich and poor in contemporary New York puts new pressure on the Heights as more affluent newcomers move into buildings that once sustained generations of wage earners and the owners of small businesses.

Crossing Broadway is based on historical research, reporting, and oral histories. Its narrative is powered by the stories of real people whose lives illuminate what was won and lost in northern Manhattan's journey from the past to the present. A tribute to a great American neighborhood, this book shows how residents learned to cross Broadway--over the decades a boundary that has separated black and white, Jews and Irish, Dominican-born and American-born--and make common cause in pursuit of one of the most precious rights: the right to make a home and build a better life in New York City.

Robert W. Snyder is Associate Professor of Journalism and American Studies at Rutgers University-Newark. He is the author of Transit Talk and The Voice of the City and co-author of Metropolitan Lives. Formerly the editor of Media Studies Journal, he also worked at Newsday, the journalism review More, the Tarrytown Daily News, and Channel 13/WNET, the public television station of New York City. Snyder served as a consultant and interview source for National Public Radio's Sonic Memorial project on September 11 and the World Trade Center, which won the Peabody Award.