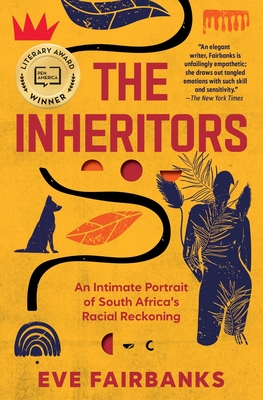 Longlisted for the PEN/John Kenneth Galbraith Award for Nonfiction

This “elegant” and “unfailingly empathetic” narrative (The New York Times) follows three ordinary South Africans living through the most extraordinary reckoning with race and power any modern country has ever faced.

Dipuo, who grew up in apartheid-era Johannesburg’s largest Black township, conceived her only daughter, Malaika, on the mine dump that separated the Black city from the white one. Christo, one of the last white men drafted to police that boundary, would come to realize—one night on the same mine dump—that everything he had been taught to believe was collapsing to make way for something unprecedented. For Malaika and her peers would be born to a historic destiny: to grow up and live in a Black-led society.

All three—Dipuo, Christo, Malaika—and so many other South Africans would make new lives while facing huge questions: How can we let go of our pasts? How can we, as individuals, pay historic debts? And what will people who care passionately about being good do when the meaning of right changes overnight?

The Inheritors tells a story about the unexpected fates that lie ahead for other countries now facing their own reckonings over history, race, and power. Written at the intersection of politics and psychology and told through an unorthodox blend of “richly drawn” lives and “incisive observations” (The New York Review of Books), acclaimed journalist Eve Fairbanks brings a coming world “vividly into focus” (The Washington Post). “Resonant with the current American situation,” The Inheritors “draws out tangled emotions with such skill and sensitivity” (The New York Times) to arrive at subtle truths and new revelations about our responsibilities to the past—and to the future.

Eve Fairbanks writes about change: in cities, countries, landscapes, morals, values, and our ideas of ourselves. A former political writer for The New Republic, her essays and reportage have been published in The Washington Post, The New York Times, and The Guardian, among other outlets. Born in Washington, DC, and raised in Virginia, she’s lived in Johannesburg, South Africa, for thirteen years. The Inheritors is her debut.

“Eve Fairbanks writes with a rare combination of fearless psychological insight and political intelligence. This is a tremendous book: utterly absorbing and urgently thought-provoking.”
—Philip Gourevitch, author of We Wish to Inform You That Tomorrow We Will Be Killed With Our Families, winner of the National Book Critics Circle Award

“Fairbanks’s empathetic, comprehensive reporting shines… providing insight into how ordinary people build lives in the aftermath of political upheaval…. Her curiosity seems boundless... swept up in the rich tapestry of the country and... an abundance of personal memories, fables, speculation and musings.”
—The New York Times Book Review

“The Inheritors does the brutal and scintillating work of asking and answering the question of how truly lasting is liberation, inviting us into the interior lives of three of the most complicated and complicating characters I’ve read this century. Bookmaking like this is a rigorous feat of wonder, love and risk.”
—Kiese Laymon, author of Heavy, winner of the Andrew Carnegie Medal

”The most dynamic storyteller at the most interesting cocktail party could scarcely achieve more than Eve Fairbanks has…. Richly drawn and often moving.”
—The Washington Post

“Easily the most compelling new nonfiction book I’ve read in years. The Inheritors is not just a spellbinding, beautifully written story about apartheid South Africa, but also an augury for America today.”
—Suketu Mehta, author of Maximum City, a finalist for the Pulitzer Prize

“Fairbanks’s prose is masterful, and there are passages in the book that sing. It is an ambitious project. Anyone seeking to make sense of South Africa’s messy and complicated post-apartheid journey is a brave soul. And there is plenty of courageous writing in The Inheritors.”
—Foreign Policy

“A moving group portrait of disillusion and resilience.”
—The Christian Science Monitor

“Eve Fairbanks brings post-apartheid South Africa to rich, brilliant, witty, tragic, and humane life as only a wonderfully gifted writer who has lived her subject can.”
—George Packer, author of The Unwinding, winner of the National Book Award

“Fairbanks is too good a writer to resort to crude psychologizing, but she repeatedly suggests that there is a terrible price to pay for trying to ignore how people see their own situations…  unfailingly empathetic, she draws out tangled emotions with such skill and sensitivity.”
—The New York Times (Editor's Choice)

“Many times while reading this book you will stop, shiver, shake your head, and sigh. Lyrical, deep, chilling, and prescient, it’s a book we will be talking about for years to come.”
—Justice Malala, author of the #1 South African bestseller We Have Now Begun Our Descent

“Incisive.... A multigenerational and highly personal account of how [a] shift in political power—if not economic power—has affected ordinary people.”
—The New York Review of Books