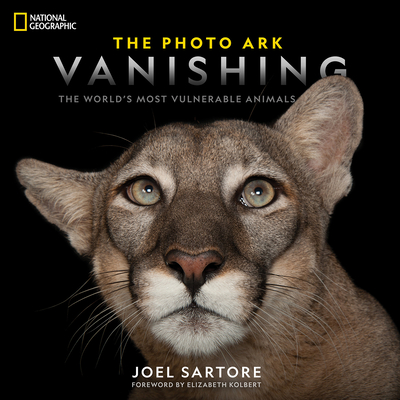 Joel Sartore's quest to photograph all the animal species under human care celebrates its 15th year with this glorious and heartwrenching collection of photographs. The animals featured in these pages are either destined for extinction or already extinct in the wild but still alive today, thanks to dedication of a heroic group committed to their continued survival. From the majestic Sumatran rhinoceros to the tiny Salt Creek tiger beetle, Sartore's photographs bring us eye to eye with the kaleidoscopic diversity of shapes, colors, personalities, and attitudes of the animal world.

In these vivid pages, Sartore singles out the species most likely to disappear in the next decades, as well as some that have already been lost. Alongside these indelible images are the words of scientists and conservationists who are working to protect and restore populations of endangered species. With Sartore's distinctive portrait photography, he invites us to look closer--and to care more.

JOEL SARTORE is a photographer, author, and 30-year contributor to National Geographic magazine, named 2018 National Geographic Explorer of the Year. Through his National Geographic Photo Ark project, he plans to photograph every species of animal under human care, an estimated 12,000. (As of Nov 2018, he has photographed nearly 9,000.) A three-part PBS/Nova special, "Rare," featured his project in 2017. His "Fundamentals of Photography" is the best-selling offering of all The Great Courses, and he is a frequent guest on CBS Sunday Morning.

ELIZABETH KOLBERT (foreword) is a staff writer for The New Yorker. Her most recent book, The Sixth Extinction, received the Pulitzer Price for general nonfiction in 2015. She is also the author of Field Notes from a Catastrophe: Man, Nature, and Climate Change. A two-time National Magazine Award winner, Kolbert is a visiting fellow at the Center for Environmental Studies at Williams College.

“I can never unsee these faces, and I believe I am a better person because of it. Thank you, Joel Sartore, for using your passion and talent to give these animals a voice.” –Amy’s Booket List

“There are nearly 300 portraits in this book. They are gorgeous. They will break your heart. But this book is SO IMPORTANT.” –Bookapotamus

“Any lover of nature or ardent conservationist would adore this book, its photos, and its message.” –JulzReads

“This book is both beautiful and heart rending. All of the animals in it are either already extinct in the wild or heading towards extinction. Just think about that. The man taking all of these magnificent pictures wants to at least make a record of each one’s existence before it falls from the earth.” –Broken Teepee

“It’s a very sad thing, to read through this book, and see all the critters on the Endangered list, and on the Extinction lists.” –The Pages In-Between

“I'm going to tell you that the photos in this book are absolutely stunning and you will find yourself compulsively turning the pages.” –Stranded in Chaos

“Joel Sartore has captured the soul of each animal on a simple black or white background, forcing the reader to look into the eyes of many of the animals that our actions are helping to decimate.” –Stephanie’s Book Reviews