Skid Road: On the Frontier of Health and Homelessness in an American City (Hardcover) 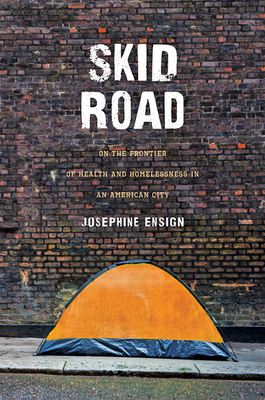 A compelling look at the historical roots of poverty and homelessness, the worthy and unworthy poor, and the role of charity health care and public policy in the United States.

Home to over 730,000 people, with close to four million people living in the metropolitan area, Seattle has the third-highest homeless population in the United States. In 2018, an estimated 8,600 homeless people lived in the city, a figure that does not include the significant number of hidden homeless people doubled up with friends or living in and out of cheap hotels. In Skid Road, Josephine Ensign digs through layers of Seattle history--past its leaders and prominent citizens, respectable or not--to reveal the stories of overlooked and long-silenced people who live on the margins of society.

The sometimes fragmentary tales of these people, their lives and deaths, are not included in official histories of a place. How, Ensign asks, has a large, socially progressive city like Seattle responded to the health needs of people marginalized by poverty, mental illness, addiction, racial/ethnic/sexual identities, and homelessness? Drawing on interviews and extensive research, Ensign shares a diversity of voices within contemporary health care and public policy debates.

Informed by her own lived experience of homelessness, as well as over three decades of work as a family nurse practitioner providing primary health care to homeless people, Ensign is uniquely situated to explore the tensions between caregiving and oppression, as well as charity and solidarity, that polarize perspectives on homelessness throughout the country. A timely story in light of the ongoing health care reform debate, the affordable housing crisis, and the COVID-19 pandemic, the stories from Skid Road illuminate issues surrounding poverty and homelessness throughout America.

Josephine Ensign is a professor in the School of Nursing and an adjunct professor in the Department of Gender, Women & Sexuality Studies at the University of Washington. She is the author of Catching Homelessness: A Nurse's Story of Falling through the Safety Net and Soul Stories: Voices from the Margins.