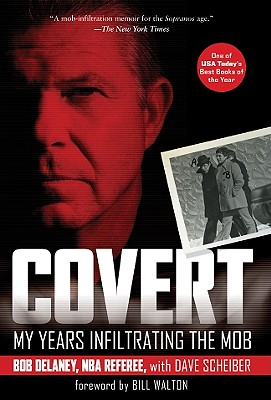 Featured on ESPN, NPR and CNNIn a riveting page-turner, NBA referee Bob Delaney reveals the clandestine life he led before becoming one of professional basketball's most respected officials.Soon after joining the New Jersey State Troopers in 1973, Delaney was offered a tantalizing undercover assignment: to infiltrate the Mob. And so he became Bobby Covert, the president of Alamo Trucking, a fully-operational business used by law enforcement as flypaper for snagging wise guys. While wearing a wire, Delaney dealt daily with mobsters who modeled themselves after their on-screen counterparts (at the height of The Godfather's popularity), and even crossed paths with Joe Pistone, the real-life Donnie Brasco. After three tense years playing a role in which a single slip could cost him his life, Delaney had gathered enough evidence to convict more than 30 members of the Genovese and Bruno crime families.Struggling with post-traumatic stress disorder from the strain of his undercover life, Delaney began officiating high school and intramural basketball games as a way to rebuild his life, eventually working his way up to the NBA, where he has been a referee for over two decades. This is his amazing true story.