From the World of Percy Jackson: The Sun and the Star (Hardcover) 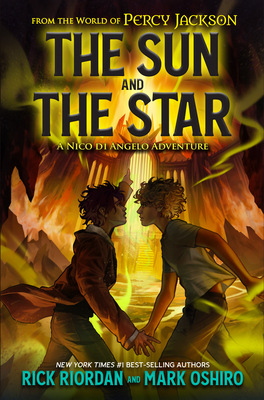 Demigods Nico di Angelo and Will Solace must endure the terrors of Tartarus to rescue an old friend in this thrilling adventure co-written by New York Times #1 best-selling author Rick Riordan and award-winning author Mark Oshiro.

Percy Jackson fans, rejoice! Nico and Will have a book of their own!

As the son of Hades, Nico di Angelo has been through so much, from the premature deaths of his mother and sister, to being outed against his will, to losing his friend Jason during the trials of Apollo. But there is a ray of sunshine in his life—literally: his boyfriend, Will Solace, the son of Apollo. Together the two demigods can overcome any obstacle or foe. At least, that's been the case so far...

Now Nico is being plagued by a voice calling out to him from Tartarus, the lowest part of the Underworld. He thinks he knows who it is: a reformed Titan named Bob whom Percy and Annabeth had to leave behind when they escaped Hades's realm. Nico's dreams and Rachel Dare's latest prophecy leave little doubt in Nico's mind that Bob is in some kind of trouble. Nico has to go on this quest, whether Mr. D and Chiron like it or not. And of course Will insists on coming with. But can a being made of light survive in the darkest part of the world? and what does the prophecy mean that Nico will have to "leave something of equal value behind?"

Nico will have to face demons both internal and external as his relationship with Will is tested to the core in this standalone adventure featuring two of the most popular characters in the Percy Jackson saga.

Complete your Nico di Angelo collection with these series by Rick Riordan: Percy Jackson and the Olympians • The Heroes of Olympus • The Trials of Apollo

Rick Riordan (he/him), dubbed “storyteller of the gods” by Publishers Weekly, is the author of five #1 New York Times best-selling middle grade series with millions of copies sold throughout the world, including Percy Jackson and the Olympians, The Heroes of Olympus, and the Trials of Apollo, all based on Greek and Roman mythology. He lives in Boston, Massachusetts with his wife and two sons. Follow his news on RickRiordan.com.

Mark Oshiro (they/them) is the author of the young adult books Anger Is a Gift, winner of the 2019 Schneider Family Book Award, and Each of Us A Desert, an NPR Best Book of 2020. Their middle grade books include The Insiders, a Publishers Weekly Best Book of the Year; and You Only Live Once, David Bravo. When not writing, they are trying to achieve their life goal of petting every dog in the world. Mark is based in Atlanta, Georgia and their website is MarkOshiro.com.