Energy Island: How One Community Harnessed the Wind and Changed their World (Paperback) 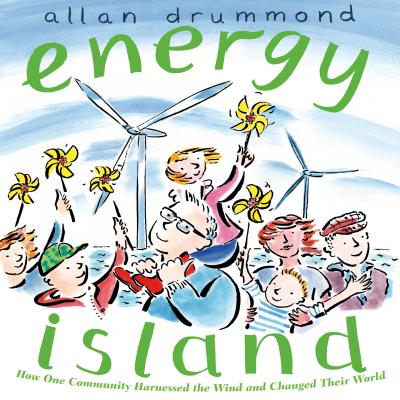 Hold onto your hats! It's windy on the Danish island of Samsø. Meet the environmentally friendly people who now proudly call their home Energy Island.
At a time when most countries are producing ever-increasing amounts of CO2, the rather ordinary citizens of Samsø have accomplished something extraordinary—in just ten years they have reduced their carbon emissions by 140% and become almost completely energy independent. A narrative tale and a science book in one, this inspiring true story proves that with a little hard work and a big idea, anyone can make a huge step toward energy conservation.

Author/illustrator Allan Drummond studied at the Royal College of Art. His many books include Tin Lizzie, a Green Earth Honor Book. He lives in Savannah, Georgia ,where he is Chair of Illustration at the Savannah College of Art and Design.

Author/illustrator Allan Drummond studied at the Royal College of Art. His many books include Tin Lizzie, a Green Earth Honor Book. He lives in Savannah, Georgia ,where he is Chair of Illustration at the Savannah College of Art and Design.

“The thrilling idea, the book concludes, is that Samso is ‘not very different from where you live.' Your community doesn't need wind; it needs a spark, to get people to think and work together.” —Los Angeles Times

“Energy Island opens with the power of wind captured by a pinwheel, an illustration that neatly encapsulates this remarkably accessible book about the path to energy independence on the Danish island of Samso.” —The New York Times Book Review

“In this first title in a planned series of picture books about sustainable energy, Drummond combines winsome, kinetic, ink-and-wash illustrations with a succinct, simply phrased, smoothly flowing narrative that describes how Samsø transformed itself.” —Starred, Booklist

“The illustrations further personalize the story with energy of their own as they bring Samsø and its residents to life.” —Starred, School Library Journal

“The message is clear: An initially unconcerned community banded together and took steps that led to their current fame as a model of environmental action; we other residents of the island that is planet Earth can do that, too.” —Kirkus Reviews

“Energy independence may not seem like a gripping topic for a picture book, but Drummond (Tin Lizzie) tells the story of the Danish island of Samsø so engagingly that families may find themselves considering wind turbines for their backyards.” —Publishers Weekly