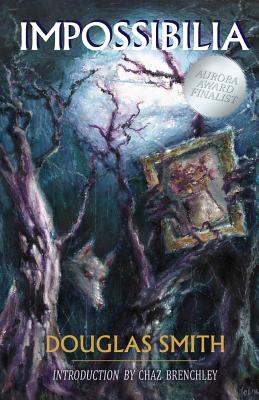 FINALIST FOR THE AURORA AWARD-Best Collection

We all have things we hide away inside--secrets, fears, aspects of ourselves we keep locked away. Or try to.

In that respect, the characters we meet in Impossibilia are like any of us. They have things inside them too. Only their things are a little... different.

A dead wife that won't leave. A wolf. The secret to being the luckiest man alive.

Impossibilia was the first collection of short fiction from multi-award-winning author Douglas Smith and includes the following novelettes:

In "Bouquet of Flowers in a Vase, by van Gogh," remote viewing drives a search through the past for lost masterpieces. An ex-CIA agent, haunted by the presence of his dead wife, falls in love with a beautiful remote viewer with her own secret. But can viewing the past change the present?

Cree legends, a love triangle, a covert government agency, and shape shifters collide in the award-winning "Spirit Dance," described in Challenging Destiny as "...a vivid and wonderfully written tale about Native Canadian spirits, in the vein of Thomas King."

In "Going Down to Lucky Town," an itinerant gambler chases a streak of luck across the country, while trying to win back the love of his daughter. The secret he finds forces him into an ultimate gamble for the highest stakes of all: his daughter's life.

And through all the stories, these characters share one more thing beyond what they hold inside. In the decisions they face, in the choices they make, they do what they do out of love. Lost love, found love, the love of a child. But love. So maybe they aren't that different from us after all...

Douglas Smith is an award-winning Canadian author of fantasy, SF, horror, supernatural, and the ever popular "undefinable" who has been published in thirty countries and twenty-five languages around the world. Doug is a three-time winner of Canada's Aurora Award for speculative fiction and has been a finalist for the international John W. Campbell Award, Canada's juried Sunburst Award, the CBC Bookies award, and France's juried Prix Masterton and Prix Bob Morane. His other works include: THE WOLF AT THE END OF THE WORLD (Lucky Bat Books, 2013) - Urban fantasy novel CHIMERASCOPE (ChiZine, 2010) - Collection - Finalist for the Sunburst Award, Aurora Award, and CBC Bookies Award PLAYING THE SHORT GAME (Lucky Bat Books, 2014) - A writer's guide LA DANSE DES ESPRITS (Dreampress, 2011) - Collection - Finalist for France's Prix Masterton and Prix Bob Morane A sample of what others have said about Doug and his writing: "One of Canada's most original writers of speculative fiction." - Library Journal "His stories are a treasure trove of riches that will touch your heart while making you think." - Robert J. Sawyer, award-winning author "A great storyteller with a gifted and individual voice." - Charles de Lint, award-winning author Doug's website is www.smithwriter.com and he tweets at smithwrtr.