Laboratories of Virtue: Punishment, Revolution, and Authority in Philadelphia, 1760-1835 (Published by the Omohundro Institute of Early American Histo) (Paperback) 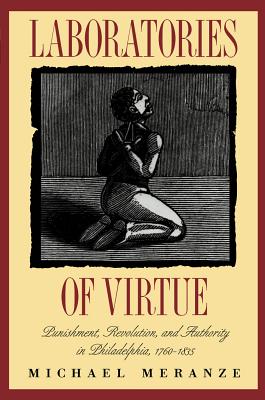 Michael Meranze uses Philadelphia as a case study to analyze the relationship between penal reform and liberalism in early America. In Laboratories of Virtue, he interprets the evolving system of criminal punishment as a microcosm of social tensions that characterized the early American republic. Engaging recent work on the history of punishment in England and continental Europe, Meranze traces criminal punishment from the late colonial system of publicly inflicted corporal penalties to the establishment of penitentiaries in the Jacksonian period. Throughout, he reveals a world of class difference and contested values in which those who did not fit the emerging bourgeois ethos were disciplined and eventually segregated.

By focusing attention on the system of public penal labor that developed in the 1780s, Meranze effectively links penal reform to the development of republican principles in the Revolutionary era. His study, richly informed by Foucaultian and Freudian theory, departs from recent scholarship that treats penal reform as a nostalgic effort to reestablish social stability. Instead, Meranze interprets the reform of punishment as a forward-looking project. He argues that the new disciplinary practices arose from the reformers' struggle to contain or eliminate contradictions to their vision of an enlightened, liberal republic.