A Kind and Just Parent: The Children of Juvenile Court (Paperback) 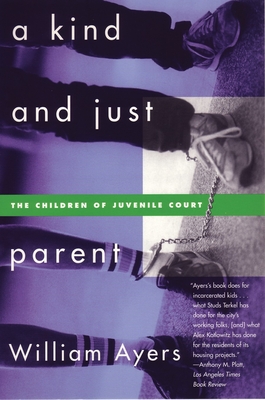 By William Ayers
Not Available
Usually Ships in 1-5 Days

Most people know juvenile offenders only from daily headlines, and the images portrayed by the media are extreme and violent: predators and even "superpredators." Distorted and incomplete, these pictures shape the way Americans think and feel about city kids, poor kids, children of color.

A Kind and Just Parent gives us a transformative view of kids caught up in the justice system that we could never get from nightly news and newspaper stories. William Ayers has spent five years as teacher and observer in Chicago's Juvenile Court prison, the nation's first and largest institution of juvenile justice, founded by legendary reformer Jane Addams to act as a "kind and just parent" for kids in need. Today, immensely confused and confusing, it serves as a perfect microcosm of the way American justice deals with children.

Through brilliant storytelling, Ayers captures the lives and personalities of young people caught up in the juvenile justice system. The book follows a year in the life of the prison school. Its characters are three dimensional: funny, quirky, sometimes violent, and often vulnerable. We see young people talking about their lives, analyzing their own situations, and thinking about their friends and their futures. We watch them throughout a school year and meet some remarkable teachers. From the intimate perspective of a teacher, Ayers gives us portraits, history, and analysis that help us to understand not only what brought these kids into the court system, but why people find it hard to think straight about them, and what we might do to keep their younger brothers and sisters from landing in the same place.

Unsentimental yet wrenching, A Kind and Just Parent is a riveting look at kids and crime. It will change the way Americans think about juvenile crime and juvenile justice.

William Ayers is a longtime teacher and activist, award-winning education writer and reformer, and professor at the University of Illinois at Chicago. He and his wife, Bernardine Dohrn, live in Chicago. They have three sons.

"Ayers's book does for incarcerated kids . . . what Studs Terkel has done for the city's working folks, [and] what Alex Kotlowitz has done for the residents of its housing projects." --Anthony M. Platt, Los Angeles Times Book Review

"Bill Ayers is a gifted writer and an acute observer of the inferno which we call the Juvenile Court. No part of the American justice system is less observed or more greatly in need of reform. A Kind and Just Parent is a moving and intensely sympathetic account of the lives of both the adults and children caught in the sometimes hopeless maelstrom of our juvenile justice system. At every level, it is a book full of grace." --Scott Turow, author of Presumed Innocent

"William Ayers is as sensitive and gifted a chronicler as he is a teacher. His odyssey-for it is far more than just a tour-through the juvenile court is Dickensian in its tragic, maddening detail and dimension; and yet it is strangely hopeful."--Studs Terkel

"At last a heroic and insightful account of what poor young people have had to endure in the Cook County Juvenile Court system. . . . Ayers, I salute you. Your words cut true. And no one can escape their clarion message."--Luis J. Rodriguez, author of Always Running: La Vida Loca, Gang Days in L.A.

"A very important and disturbing book about the betrayal of Jane Addams's dream and the ways in which heroic individuals still struggle to defend the dignity of children in the face of crushing odds. It is Bill Ayers's immersion in the lives of those who go before the court that gives this book its strength and passion and intensity. Vivid narratives are set in context by an author who has studied history and understands the politics of juvenile injustice. I hope this book will reach the ears of Congress."--Jonathan Kozol, author of Amazing Grace and Savage Inequalities

"As juvenile crime increases, the brutal conditions that produce delinquents have risen even faster. Since 1960 the number of child abuse or neglect cases handled by juvenile courts has risen five times faster than delinquency cases, which have nearly quadrupled. With that in mind, one might ask why so many children become delinquents and how so many avoid becoming delinqents. . . . [Ayers] offers a view of delinquent youths you won't see much of on the evening news. It is not scary enough. It is only tragic." --Clarence Page, Chicago Tribune