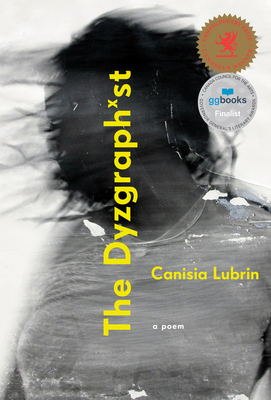 Canisia Lubrin returns with a mesmerizing new collection, the follow-up to her breakout book, Voodoo Hypothesis.

The Dyzgraphxst presents seven inquiries into selfhood through the perennial figure Jejune. Polyvocal in register, the book moves to mine meanings of kinship through the wide and intimate reach of language across geographies and generations. Against the contemporary backdrop of intensified capitalist fascism, toxic nationalism, and climate disaster, the figure Jejune asks, how have I come to make home out of unrecognizability. Marked by and through diasporic life, Jejune declares, I was not myself. I am not myself. My self resembles something having nothing to do with me.

CANISIA LUBRIN is a writer, editor, and teacher published and anthologized internationally, including translations of her work into Italian and Spanish. Lubrin's debut poetry collection, Voodoo Hypothesis, was named a CBC Best Poetry Book, longlisted for the Gerald Lampert Memorial Award and the Pat Lowther Memorial Award, and shortlisted for the Raymond Souster Award. Her work has been nominated for, among others, the Toronto Book Award, Journey Prize, and bpNichol Chapbook Award. 2019 Writer in Residence at Queen's University, Lubrin holds an MFA from the University of Guelph.

Praise for Canisia Lubrin and The Dyzgraphxst:

“This book is a triumph of anticolonial poetics. In this poet’s steady hands, the world within flashes a perfectly dark mirror. Here, our fractured history is projected through Lubrin’s fractured voices, her dazzlingly splintered verse. By inventing her own lyric architecture, imbued with startling and slant textual experiments, each line sings with a multitude of tongues, until Lubrin’s verse coalesces into her own individual patois. Her lines twist like roots gathering voices, roiling waves of language that immerses the reader inside the poet’s distinct rhythm. Unsparingly political, and charged with great wit, these poems tackle climate change, the immigrant experience, and critiques the long colonial shadow of the west. Settled in its marrow is a sense of loss—loss of selves, of country, of family, of a mother tongue, all transformed by The Dyzgraphxst into its own potent kind of singing, armed with this defiant blaze of being alive.” —Safiya Sinclair, author of Cannibal

“Canisia Lubrin’s extraordinary second collection, The Dyzgraphxst, ‘[is] a moonlit knife.’ By which I mean, it is as sharp-witted as it is sharp-eyed. With the blade pointed up, Lubrin unceasingly and masterfully holds the hypothetical knife up to the face of Jejune, the poem’s protagonist, so she might see her reflection—so we, lucky readers, might see ourselves. And, I’m here for all of it.”—Nicole Sealey, author of Ordinary Beast

“Canisia Lubrin’s The Dyzgraphxst disrupts the conventional grammars of knowing, the grammars that represent as much as they create invidious divisions—between the ionic column of the self-important ‘I’ and the he/she/you; between subject and object; between the political and the personal; between the times we live in and the writing that seeks not merely to represent it but to (re)create it as well; between utter brokenness and carrying on. Though the dyzgraphxst is one who suffers from disgraphia, this disgraphia seems to be claimed (even stylized) as the legitimate language of the time and for the self, therein subverting conventional and oppressive hierarchies internal and external to oneself, in which the creolized or pidginized selves dominate the dialectic, are given agency and are those best suited to negotiate the modern unravelling world and self. The particular challenge and conceit of the collection, is that most of this is found in the grammar itself, in the sinews of language and canyons between one word and the next, as in the consonantal angularity of its title, in the sometimes unlanguageable darknesses of self-searching in a fractured, confusing world.” —Vladimir Lucien, author of Sounding Ground

“We who come from songs will recognize ourselves in Canisia Lubrin’s The Dyzgraphxst. Lubrin sings us into being and breathing us through these times with lyrical energy that is at once delicate and forceful.”—Juliane Okot Bitek, author of 100 Days

“The Dyzgraphxst pushes the envelope of the lyric self to describe the human self. Canisia has shuffled the deck and added a new identity to the creative table.”—Nick Makoha, author of Kingdom of Gravity

"[A]n ambitious project, combining a lyric attention to the representation of the self with an epic scope and focus on the fate of a community, in this case on a planetary scale. If Lubrin’s 2017 debut, Voodoo Hypothesis, presented a significant new poetic talent on the Canadian scene, The Dyzgraphxst marks a considerable development in that talent’s achievement." --Quill & Quire (Starred Review)

“In Canisia Lubrin’s debut collection of poetry, she pointedly observes that ’the alien we think we know is the alien we only dream up.’ Voodoo Hypothesis is an imperative invocation of black dreams, an invitation for the living and the dead to define themselves. With poems at once epic and intimate, Voodoo Hypothesis requires a reverence for the individual word, to bear witness to Lubrin’s ’brilliance indistinguishable from magic.’”—Vivek Shraya, author of I’m Afraid of Men

“Voodoo Hypothesis is an interior in motion: a gorgeous, searching intelligence. It is a womb/tomb of luminous inquiry. A semi-permeable ship where your mind is in concert with Lubrin’s forward propagating lineation, a participatory dreamscape that leads you back to your own culpability. This is a work that reads you, too.”—Liz Howard, author of Infinite Citizen of the Shaking Tent