From Outrage to Courage: The Unjust and Unhealthy Situation of Women in Poorer Countries and What They are Doing About It: Second Edition (Paperback) 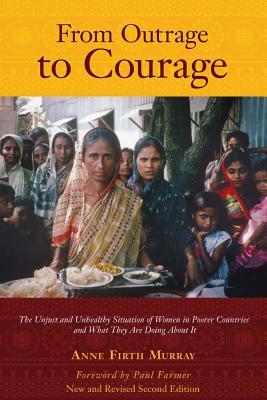 From half a million women who die in pregnancy and childbirth to one out of three women suffering domestic violence worldwide, from 90 million girls who do not go to school to HIV/AIDS spreading fastest among adolescent girls, women around the world face unique health challenges. In this searing cradle-to-grave review, Anne Firth Murray tackles health issues from sex selective abortion and unequal access to food and health care to the challenges faced by aging women. Murray makes clear that the issues are social, ethical, and political much more than they are medical, and she goes further to provide hope that positive change can happen.

Anne Firth Murray, a New Zealander, attended the University of California, Berkeley, and New York University, where she studied economics, political science, and public administration, with a focus on international health policy and women's reproductive health. In the 1960s and 70s, she worked at the United Nations, taught in Hong Kong and Singapore, and spent several years with Oxford, Stanford, and Yale university presses. In the 1970s and 80s, she worked in the field of philanthropy, serving as a consultant to many foundations. From 1978 to the end of 1987, she directed the environment and international population programs of the William and Flora Hewlett Foundation in California. She is the Founding President of the Global Fund for Women, established in 1987, which provides funds internationally to seed, strengthen, and link groups committed to women's well being. Her book Paradigm Found: Leading and Managing for Positive Change describes lessons learned from the early years of the Global Fund. Since 2000, she has been a consulting professor in human biology at Stanford University, where she teaches courses on international women's health and human rights. and on love as a force for social justice. The first edition of her second book, From Outrage to Courage: Women Taking Action for Health and Justice, was published in 2008. Ms. Murray serves on several boards and councils of non-profit organizations, including the African Women's Development Fund, Commonweal, the Global Force for Healing, the Global Justice Center, and SPARK (a network dedicated to women's empowerment). She is the recipient of many awards and honors for her work on women's health and philanthropy, and in 2005 she was among one thousand women nominated for the Nobel Peace Prize. Ms. Murray has one daughter, who is an attorney in California, and two grandchildren. She lives in Menlo Park, California. To learn more, please visit www.annefirthmurray.com.